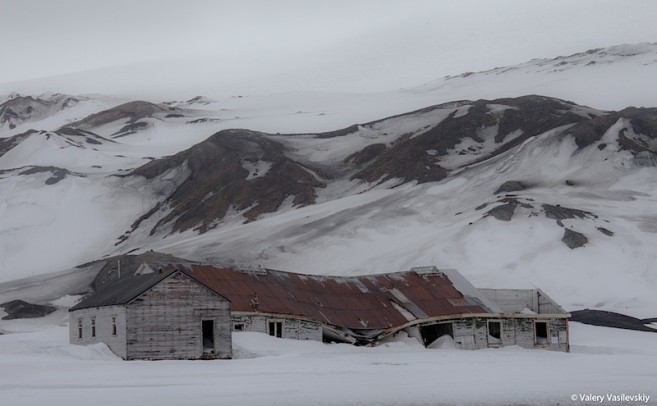 Around 06.45 this morning we passed through the Neptune's bellows, the narrow inlet to the Deception Island Caldera.

Around 06.45 this morning we passed through the Neptune's bellows, the narrow inlet to the Deception Island Caldera. To make entering the Caldera a bit more interesting, Ravens Rock is quietly sitting in the middle of this inlet. This rock has caused trouble for many sealing and whaling ships in the past.

We anchored in the Whalers Bay, an old Norwegian Whaling station. The remains of the old whalers houses, oil tanks and boilers were still standing and planks from old barrels were sticking out of the snow here and there. Deception Island is an active volcano, that erupted the last time in the late 60's. It is possible to make your boots toasty warm standing on the steaming black sand on the beach. The nearshore sea water is lukewarm. In the old days it was probably very popular among the workers to dig a hole in the sand and wash off the whale blubber after a hard day of work. The season was short and men were working probably day and night. Some did not make it out: there was two marked graves in the bay.

Despite acknowledging the devastating consequences that these whaling stations brought to the whale populations of the world, it was a special feeling to sit down and imagine the lives of the whalers who lived in the bay. The work was hard and quite unpleasant, but it is easy to imagine how the rough landscape and the steaming beach takes a hold of you if you stay there for a longer time. Sailing in and out the Neptune's Bellows must have meant a great deal for the sailors of the time, seeing the familiar shapes of the basalt on both sides one time after another, either heading out for the hunt or coming back to the sheltered bay, wet and rugged and happy to back safely.