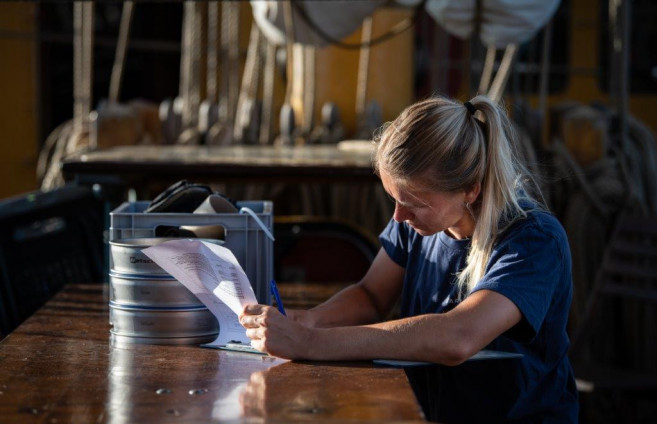 We have now crossed the equator and are travelling south with the Brazilian current and the south-eastern trade winds. Although the wind has been consistently strong we have still managed to find opportunities to slow the ship and deploy the manta trawl. As usual we followed the same procedure, making sure to measure data such as the salinity, sea surface temperature and weather conditions as well as other conditions such as speed and the geographical position of the ship.

The crew and voyage crew have been monumental in helping with deploying the trawl as well as searching through the samples for microplastic. We have now trawled enough times that we are in a rhythm and very confident whenever it is time to deploy the trawl. Some have even been assigned at usual positions such as the manta trawl halyard and tow-line. Some have even taking a liking to the visual analysing of the sample and have developed a keen-eye at finding and picking out the plastics.

The results have been consistent. In all trawls done, plastic has been found. This continues to emphasise the extent that plastic pollution is such a huge problem facing our planet. Although in a completely different hemisphere, the results have been conclusive so far in suggesting that there isn´t a single part of the ocean that is unaffected by plastic pollution. In the samples we found a variety of different types of plastic particles including, parts of fishing lines, bottle caps, wrappers, microfibers and nurdles just to name a few.

Plastic nurdles is small plastic pellets about 5 mm in length, but can vary in size. They are used as raw material in plastic production. During production and transportation these can be spilled into the environment. They are also called Mermaid Tears by environmental organisations and they look like fish eggs. This means that a lot of marine animals end up eating these plastic pellets.

These pellets contains toxic chemicals that then end up in the animals eating them. The toxins bioaccumulate and extends up through the food chain. The pellet itself built up in the digestive system of the animal and it get a false feeling of feeling full, because plastic pellets are not digestible.

Even with an abundance of plastic pollution, wildlife still seems to be present. A number of dolphins visited our ship. They were a rare type of dolphin called Clymene dolphin and they stayed, playing under the bowsprit for an hour or so. For me this acted as a reminder of the beauty of the ocean and the wildlife within it as well as why it is so important to protect it. These beautiful animals have given me even more motivation in continuing the research and doing what I can to help conserve the wildlife we have left.