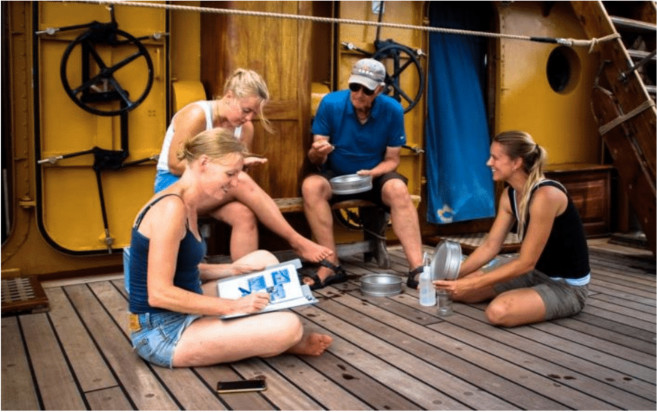 After spending a few days dockedin Tenerife we embarked on our journey crossing the Atlantic Ocean.
The first week of sailing the wind and sea state weretoo strong for trawling. So instead of trawling, the Manta Trawl was givena well needed make-over.
A new manta net replaced the old, as a few holes had begun to show.
The old net will be repaired and used as a backup.
The new net has been well secured to the trawl withlashings of white waxed thread.
I used a sail maker seaming palm to lash it securely to the trawl.
A rope of natural Manilla has been attached to the wings of the manta trawl to prevent the trawl from damaging the ship side when launched and recovered.
On board the ship I have given talks about plastic pollution and the effects to the ocean environment and the voyage crew haveshowedinterest in the topic and have also been very much involved in the research project.
They help launch and recover the manta trawl and they help with analysing the samples visually for microplastic particles.

After a week sailing the tropical North Atlantic we arrived in the waters of Cape Verde and the wind and sea were once again calm enough to launchthe manta trawl.
The results proved hopefulfor the environment as we discovered less plastic in the samples collected at the area.
The distribution and accumulation of ocean plastics is strongly influenced by currents and wind patterns.
The Cape Verde is placed just at the edge ofthe North Equatorial Current which is part of the North Atlantic Gyre.
An ocean gyre is a system of ocean currents moving in a circular pattern.
The gyre’s circular motion attracts particularly small plastic particles transporting them to the centre of the gyre.
So the waste from the coast of the lower part of Europe and top part of Africa is transported via the currents and wind patterns tothe North Atlantic Gyre where it remains.
There are 5 major gyres on Earth.
These are the North Atlantic, the South Atlantic, the Indian, the North Pacific, and the South Pacific.
Around Cape Verde Islandwe also found lots of seaweed in the water, making the task of finding the microplastic particles in the sieves particularly difficult.
The voyage crew have now developed a keen eye for picking out microplastics and so it didn’t take long for them to adjust to this issue.
A few have become consistent and skilled at picking out even the smallest of particles and although it is like picking out a needle in a hay stack the voyage crew still manage.

It was interesting to see the wildlife in the sample amongst the microplastics.
Unusual and fascinating creatures became apparent and it made for a fun afternoon of trying to identify and name these different species.
Although it is always upsetting seeing such incredible animals in and amongst plastic pollution it is inspiring to see such diversity even so far away from the main-coast.
Soon we will enter the waters and currents at the southern hemisphere where I suspect to find even more plastic particles in my samples.
This is because we are getting closer to the South Atlantic Gyrewhere plastic accumulates.