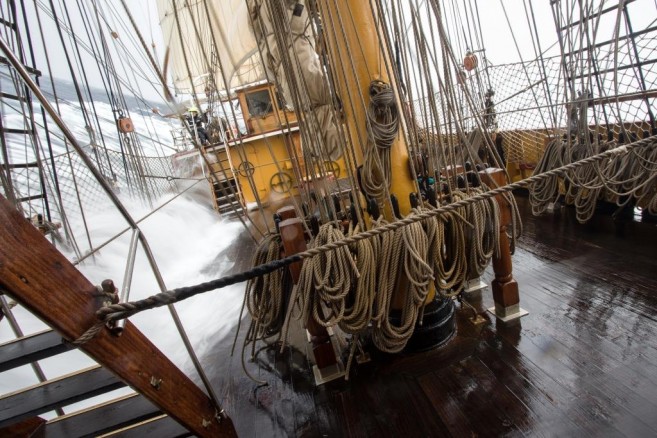 During last evening the rain started falling and it hasn’t stopped during the whole day, this together with strong winds backing from NE to NNE and quite a wild sea conditions, made our watches busy… and wet… sail handling on deck. Watertight doors on the Deckhouse and access to Library were closed as the swell comes over the rails threatening to get inside the ship. And everywhere inside the Europa becomes wet and mess, keeping the crew busy trying to tidy up. We all have to deal with the rain and once inside, with the wet foul weather gear.

Water falling from above and water coming from over the sides as the ship rolls and the swell washes the decks over the rails. We keep ourselves at the edge of a Low Pressure system located Northwest of us, sailing around it following a ridge between it and a High Pressure system in the mid Atlantic. Like this we can have quite strong winds without running into calm areas, and keep a good speed Southwards. Talking about the wind, it has been over 20 to 25 knots during last night and today, but it has been quite gusty, blowing sometimes 35 knots, this combined with a 4 m swell from the NNE make the ship roll quite a bit. Dealing with those gusts and swell, kept us busy on deck, first gybing on the early hours, with both permanent watches, plus the voyage crew watch involved in the manoeuvre, during the watch changeover.

All happened in the rough conditions, quite wild seas and under the rain that accompanied us for the whole day. Then, during the day we kept going with several sail changes while bracing from square to Starboard tack gradually as the journey goes by, as the wind keeps slowly backing. In the weather and swell conditions that we are having, Klaas and Gijs prefer that the permanent crew steers the ship, while the voyage crew can also give a hand on that, but preferably doing lookouts and standby for sail handling.

Europa today sailed at good speed while riding the NNE swell and with a favourable current of around 2 knots. The lecture program on board keeps going on, and today we started a set of interesting talks on Celestial Navigation with our crewmember Elliot.