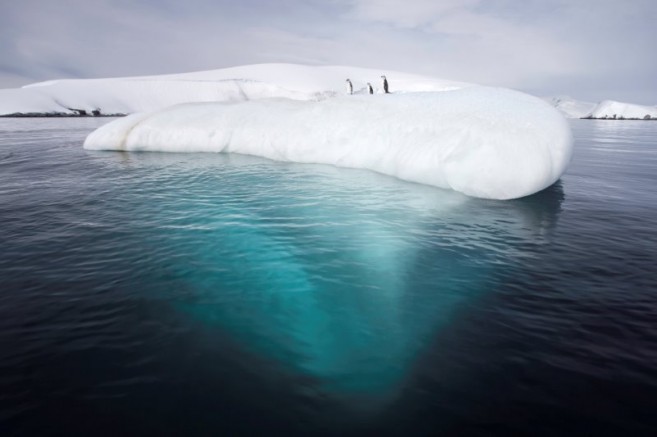 Easily most exotic New Year's party location ever -- main deck of Europa at anchor in Port Lockroy, snuggling against glaciers and covered by low clouds. As the crew prepared for a celebration -- "beerhive" (subsequently repurposed for champagne bar) hoisted on the main mast, main deck and deckhouse flapping with flags and shining with lights -- we could reflect on the passing 2014.

For this 2014/2015 Europa's expedition to Antarctica can really be described as a "blessed" voyage: Mr. Drake was (apparently) very kind to us (at least on the way over); we have had incredible weather -- ranging from t-shirt-sunburnt hikes to fluffy snowfall on Christmas, and from clear blue skies during iceberg safaris to fresh snow on top of glaciers to fall into; we had (in)officially
inaugurated a "Whale Day" after over 30 humpbacks (in groups of up to 5) seemed to follow Europa the entire day and feed within 5 meters of the boat; the crew was tired of spotting seals (singing weddels, crab-eaters, as well as leopards, with even a fur seal having made aspecial appearance); we made it through Le Maire channel (which had been closed by ice) to reach the "Plan A" southernmost point of our journey (Vernadsky station) taking on a massive iceberg as the last obstacle after a whole day of sailing through ice.

Needless to say by now some of us are no longer impressed by penguins (not even by the adelis racing across snow on their bellies); and on the last day of 2014, we saw a group of orcas scouting out the bay, with a minky whale hugging Europa for protection. So quite a bit to be grateful for and celebrate. And celebrate we did -- including the last DJ set by the captain (though closing down the party proved slightly more difficult then planned). In Russia we say that your New Year will turn out like you welcome it -- so here is to a 2015 filled with stunning landscapes, wicked adventures and whales ;)