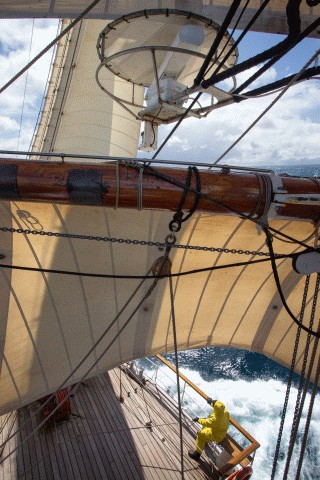 Last night things became a bit rocky on board, as we sailed through wind gusts up to 40 knots from a SW-ly direction, as we sail North with high Westerly swell. That means lots of rolling. Now we know how all kind of stuff that is not sea fasten learn how fly around, the problem being that they don’t know how to properly land…

All an all a rocky night and morning for all of us, many couldn’t have a good sleep, while the sea watches were on deck under the snowy and cold weather. By breakfast time the wind had decreased a bit to 25-30 knots from a 220º direction as we sail pretty fast at 8-9 knots on a Northerly course, but the 3 to 4 metres swell keeps hitting us from Port side. Jordi’s talk on Polar Ecosystems programmed for the morning was postponed due to this rough conditions, hopping for them to improve and if so, tomorrow he will try again. But Doctor Bob could do his second presentation on History of Antarctic exploration through the eyes of a surgeon, in the afternoon as we were not rolling so much.

Due to the strong winds and gusts during the early hours of the day some sails have been taken down, Royals, Desmond, Outer jib, Spanker and Upper Staysails are furled, and the Main course is clued up. During the day the wind becomes more stable and at mid morning we set more canvas. In the afternoon the wind becomes W-ly around 20 kn, and we brace close hauled on starboard tack, heeling to Starboard and experiencing much less rolling, making life on board more comfortable. Then we set all canvas but Gaff top sail and the Main course. The latest is set after dinner under 17 to 20 kn of West wind, as the Europa still races at 8  knots Northwards. We are still following the back side of a Low pressure system giving us fair winds for a fast Drake crossing. What a difference with the calm Drake that we had on our way South, when we had to motor quite a lot to reach Antarctica. Now, during the last couple of days we are just having a good sailing Drake Passage. Like this we round a great trip to Antarctica, with a bit of everything combined, both during the sailing and also doing a broad range of different activities and experiences ashore.

During our eight o’clockie, Eric informs us about the weather and wind situation, so far having sailed 180 nm during the last 24hrs and now just keep having fair winds and great sailing in the middle of the Drake Passage, but still South of the Antarctic Convergence. The water temperature is below 2ºC, but we expect it to rise quickly during the night, then we will be off Antarctic waters and entering the temperate Sub Antarctic marine ecosystem. Even though we are still on those cold Antarctic waters, we can see in the amount of wildlife around us and the changes on species diversity, that we are reaching this biological boundary. Like this, several species of Albatrosses fly around, including the common Black browed, the beautiful Grey headed and the elegant Light mantled. All Subpolar species, but using the waters around the convergence for feeding and gliding on the strong winds. Those large birds were spotted today together with large flocks of Antarctic prions, White chinned and Cape petrels. During the night the Europa sails at full canvas at a good speed of 7 to 8 knots, until just before midnight when we had a squall passing and we take away and furl Royals and Upper Staysails.