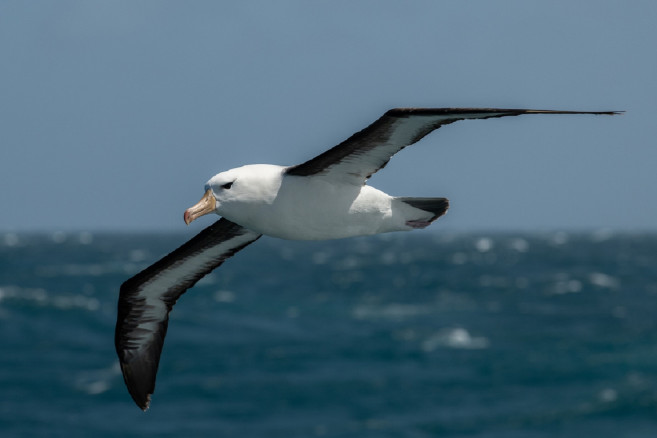 Rising winds veering from Westerlies to Northwesterlies. Rolling in the South Atlantic.

The albatross did follow
And every day, for food or play
Came to the mariners hollo!
In mist or cloud, on mast or shroud
It perched for vespers nine
Whiles all the night,
through fog-smoke white
Glimmered the white moon-shine.

“God save thee, ancient Mariner!
From the fiends, that plague thee thus!”

Samuel Taylor Coleridge. “The Rime of the Ancient Mariner”

Immortalised by The Rime of the Ancient Mariner by Samuel Taylor Coleridge, everyone knows the age-old superstition that says it is terribly unlucky to kill an albatross.

Albatross is among the largest of flying birds, with the largest Great albatross recorded as having a wingspan of over 11ft (about 3.5m). Though mainly found in Antarctica and the southern Atlantic, as far north as Cape of Good Hope, the albatross can fly great distances. They mate for life, but, living for fifty years or more, can spend years flying solitary. Obviously nobody’s paid much attention to the superstition against killing them, though 19 of the 21 species of albatross are on the endangered list.

3.5 meters wingspan of the Great albatrosses (Wanderers and Royals) oceanic roamers that share the same oceans and preferences for the strong winds with a large array of seabirds, including the fluttering flight of the seemingly delicate though extremely tough Storm petrels. With their scarcely 40cm measured from tip to tip of their wings, they accompany the majestic glide of their largest relatives. But giant and little don’t fly alone, flocks of prions billow fast over the swells around the ship; occasional Cape, Giant and White chinned petrels pay us a visit too. Amidst them some Soft plumaged petrels show up together with the tireless Great shearwaters.

For a couple of days now, they all have been all joining the Europa as she enjoys the good winds too and sails her Southeasterly course towards South Georgia. Perhaps waiting for some food scraps to be tossed, as they are used to the by-catches and leftovers thrown overboard by the fishing vessels; perhaps checking her wake for some nourishment to surface as she cuts through the water surface; perhaps gliding in the ship’s slipstream as she cuts through the general wind-field.
A wind that blows from the NW up to 30kn, as the Europa rolls downwind in the following swells at 7 to 8kn of speed. Her yards are braced square and her sail configuration is such to withstand the strong blows and at the same time let fore mast catch more of the aft wind. Royals are furled, and during the day her Main Course is clewed up, in the same mast Top Gallant is lowered too. Lower Staysails are packed away as well.

We have been at sea already for a few days, we all get used more and more to the watch system with its unearthly wake-up hours, the time of struggles at the wheel watching sails and magnetic compass, the pain in our hands manning ropes, and the ship’s movements with her pitching and heeling. Bags, clothes, cameras. computers, the rest of our belongings and ship’s equipment seem to be well stowed and sea fastened… until we actually hit the increasing rolling on the following growing seas and strong winds… Dressing up for starting our watch, getting ready for our bunk when finished our duties, walk around the ship corridors or venture on the wet deck when from time to time the seas slap against the hull and its spray fly wide, it all represents an extra effort and a new dance with the gravity and motion. The same game that play all equipment that it was thought to be sea-fastened until now. A noise here, a rumble there, the often booming of unexpected appliances rolling or flying around. Out on deck, ropes to be tighten to prevent chafing, head rig swaying. Hands on the wheel require to properly focus to keep the ship on course as she surfs the swell.