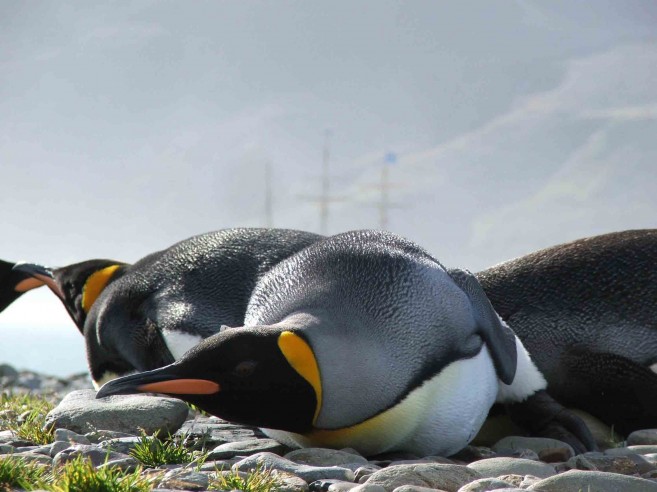 We could all enjoy a good sleep last night, in a steady sleep at anchor at Rosita Harbour.

Just a few of us volunteered for anchor watches, much shorter and quiet than the regular sailing watches. Is all about keeping a sharp eye at the navigation instruments in the wheelhouse, checking that the anchor holds properly and Europa is not going anywhere while the hook is dropped. It all happens in darkened decks, with outside lights off and portholes shutters, shut following regulations for visiting South Georgia to avoid bird strikes on deck, as the many petrels and other nesting species in the area get attracted by the lights. Rosita is located on the northwest coast of Bay of Isles, and is not very commonly visited by tourists ships. Its not a spot for big penguins colonies, maybe giving us a clue why it has been traditionally overlooked by other ships.

But instead, Rosita offers great chances for hikes on wide open spaces amongst hills, needed for us after the last few days at sea, sailing all the way from Montevideo to this gorgeous spot. After breakfast we were all ready to land, not before our guides give us a pre-landing briefing and go on the first zodiac sent ashore to have a good scout of the area. The landing beach was filled up with very inquisitive Antarctic Fur seal stinky, big and strong males. Those guys are here waiting for females to arrive from the seas, and they defend they well earned territories quite ferociously if approached. Their goal is to keep their space and join to their harems as many females as possible. The ladies come ashore pregnant from last breeding season, and soon after arrival they give birth. Approximately a week afterwards they become receptive again, moment that the males have been eagerly waiting for.

Hi Jordi, thank you for sharing. Say hi to Pieter H from all of us and we cant wait to see him and hear all about this amazing adventure. Paul, Joanna, Liam & Ella

Hi Jordy and all the other one's on EUROPA, thank you for sharing all the experiences in this log. It's giving a much better idea of what's going on during this trip. I'm very curious about all the stories when Peter is back. Say hi to him from Désirée, his wife. Happy sailing and beautifull landings!!