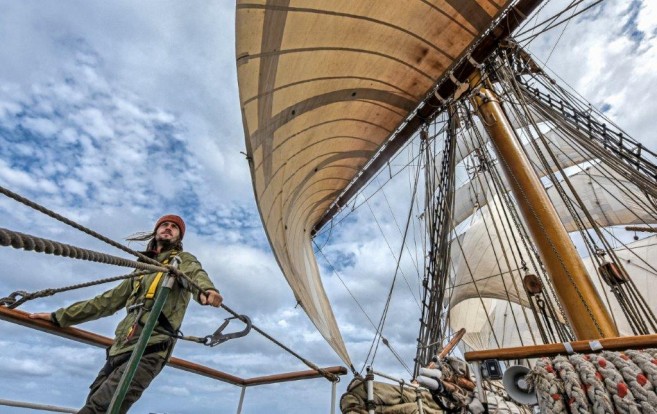 The NE-ly wind increase in the night was followed by lighter and variable conditions, with a resulting decrease in our speed. At the same time the recorded water temperature went down to 14ºC as the waterdepths increased to about 100m. As we keep on our way to South Georgia the depths just quickly increase during the journey. The drop in surface water temperature that seemed to have gradually started, didn’t follow the same tendency along the day, rising once more to about 19ºC, thus indicating that we find ourselves in the mixing area between the warmer Brazil Current flowing south and the cold Falkland Current north. The light sailing conditions disappeared later in the early morning, when strong 38kn winds from a NNE-ly direction started blowing accompanied by increasing swell. Keeping a 155º course, our speed went up to 11 to 12kn even when we dropped and furled the royals, outer jib, and royal and topgallant staysails. Riding the following seas, the
largest waves wash across the decks while Europa rolls in the increasingly heavy conditions. During the morning the winds gradually abated to 22 to 25kn, but the swell just feels like it gets higher, increasing the rolling of the ship. The easing winds allow us to set the royals again, under rainy skies that lasted until dinner time. Just before then the wind appears to drop while changing direction, backing to N-ly and soon after coming all at the way to WSW-ly starting to blow a more steady 13 to 15kn. Under those conditions it was necessary to gybe to starboard tack, dropping the dekzwabber in the process and leaving it down for the rest of the night. Like this we can keep a good course of 140º and a speed of between 5 and 6kn.
The shifting conditions experienced during the day came as a result of the transition from a high to a low pressure system, with the wind coming around the stern of the ship. Under those atmospheric
circumstances, during the night we expected an increase in the wind accompanied by dry air but with good chances of going through squalls. And indeed, after our traditional meeting with the captain and guides after diner, gusts over 35kn of wind made for clewing up and furling of topgallants and royals, keeping the rest of square sails set, double sheeting the courses and keeping speeds overnight above the 6.5kn, with unstable wind speeds, varying between 22 to 30kn. All in all we had quite a windy and variable day, rolling over the oceanic waters of the South Atlantic, as we left behind the shallow Continental Shelf and entered the open water area with depths quickly dropping to about 3000m. Entering the more oceanic realm also meant an increase in the seabird numbers and species found around the ship. Not being able to bring up on deck the big long lenses and cameras to photograph them, due to the rainy conditions and the big rolling of the ship, nevertheless we could
identify a couple of new species. Even a small passerine from the already quite distant coast of Argentina appeared on the poop deck, taking a rest and a ride on the Europa. Sometimes the strong winds blowing from the continent carry an occasional terrestrial bird far out at sea and being far way from home they seek for a resting surface. But here out at sea, gliding over the waves, several albatrosses from the family of the largest flying birds in the world, were spotted. Interestingly a few Northern Royal albatrosses soared for hours close to us. The group of the great albatrosses comprises the Wandering and the Royals, and just subtle differences make for proper identification. Having said that, the birds observed today shared the characteristics of the Royal group, with a largely white tail and black cutting edge of the bill, this together with a clear black line extending along the cutting edge of the underwing from the tip to 1/3 of the wing length, made for the identification of the Northern Royal albatross. They can be seen occasionally in this area, but not very often as their breeding grounds are located all the way in New Zealand and Chatham Islands.
Another interesting species seen today in small groups following our wake in the distance was the so called Atlantic Petrel, a quite large and robust petrel with black upperparts, underwings and head, while showing white belly and chest. Curiously enough this is another long distant flyer, having their nesting areas restricted to Tristan da Cunha and Gough Islands. With all that, the day brought demanding sailing, tiring rolling on the ocean swells and some great bird sightings, all as we sailed 180nm during the last 24h. For sure we’ll experience many more adventures and exiting wildlife sightings along the 1085nm still ahead of us until we reach the South Georgia coasts.

Nice to read the tripstorys. I could not say goodby to crew Sarah. Please, give here my kissss. Marijke

A year ago I sailed to South Georgia and the antarctic peninsula with you and enjoyed the trip very much - a once in a lifetime experience. Have fun!