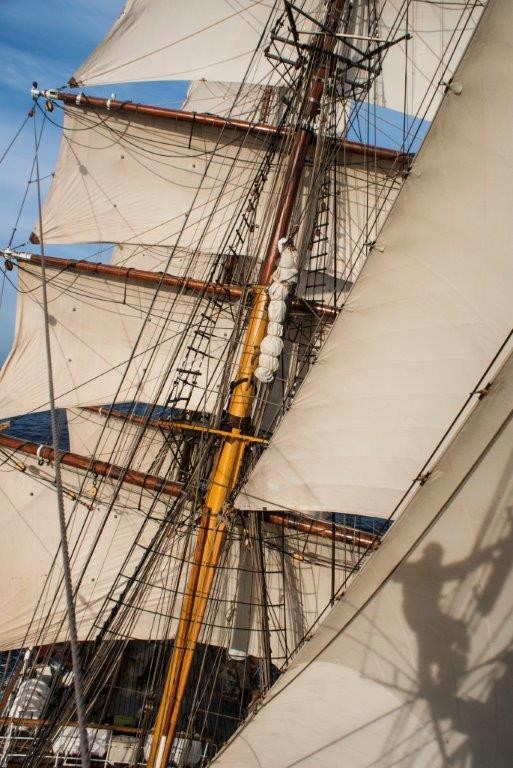 Running our Easting down

Bracing and passing all staysails to Port tack is how the day started, still in the darkness and starry skies.

People on watch was called on deck and as usual were divided between the three masts as the Mate takes the helm. Once all is ready the voice is heard to ease the lee braces while the opposite ones are to be hau-led tight. Crew stands below the masts to trim and call each yard when is well. In the meantime Spanker and Gaff Top sail must be tacked and finally the Staysails as well. With almost all the canvas set the process takes a while, keeping busy the standby people on watch out of the deckhouse.

The wind had become NW-ly since a few hours ago and having reached enough southern latitudes to find a steady breeze, we start steering on a more Eastwards course. That means Europa has the wind almost at her back and some sails start flapping and had to be taken away. Desmond was already furled hours ago, but in the morning both the other Main Staysails are furled as well.

By then, the clear skies had become overcast, and the sun just had a chance to show himself for a couple of minutes as rising over the horizon, but soon masked by the clouds. During the morning it clears up leaving again blue skies

Over 20kn up to 25 of NW-ly wind keep pulling us at a good speed, as we ride the Southern Ocean on Broad Reach, close to downwind at 7 to 8kn.

Sailing now a couple of degrees in latitude further south than Tristan archipelago, and under partially covered skies, the temperature had become fresher as well. T-shirts and shorts are now covered under light coats again. For some those are better conditions to work on deck and aloft, others miss the hot weather. Not for long as soon we will have too steer on a more N-ly course when getting closer to South Africa.

During the last 24h we had a good run of 162nm, along the route we followed, but in straight line had been 151nm. Now steering Eastwards after catching the good W-lies and NW-ly winds at those latitudes close to 40ºS, we eat down the miles between Meridians of Longitude. Soon we will cross Greenwich meridian and sail on the Eastern Hemisphere. In the golden ages of sailing this was called Running the Easting Down.

With the change of course, now more Eastbound, Europa has a more comfortable ride, practically surfing the seas, that actually has eased down from yesterday’s big swell. As the day advances the sunny skies take over the cloudy weather, all together making a pleasant sail over the calculated distance of 1298nm left until reaching Cape Town. Like this today we reach the mark of leaving behind over 4000nm of seas, since our start in Ushuaia a few weeks ago. Drake Passage, Antarctic waters, Southern ocean and now South Atlantic have seen the adventures and misadventures of our Old Wandering Lady Europa enjoying, pitching, rolling, sailing, motoring and struggling through their rough waters.

During the day some small sail adjustments kept us busy from time to time, no need for much deck and rig action as the wind has been blowing pretty steady. But Gaff Topsail and Vlieger have to be taken off and furled, while later on Desmond is set. Little bracing adjustments accompany those sails changes. Before another beautiful sunset Middle Staysail on the Main Mast and the highest one as well are hoisted again, together with the Gaff Top sail, to keep racing the South Atlantic at about 8kn.

Another remarkable point of today’s raises if we have a look at the chart and water depths of the area we sailed. The deep sea bottom, extending far below us for more than 2500m, climb up steeply on several concrete spots scattered around our position. East and Southeast of Tristan and Gough Islands, a number of underwater seamounts can be found with their tops scarcely deeper than 100m. The closest islands to us at the moment: Tristan Archipelago, Gough Island and St. Helena and those related seamounts are thought to have been formed by long lived centres of mantle materials upwelling and breaking through the Oceanic crust. Geologically those places are known as hotspots. The plume of mantle material is fixed in relation with the overlaying drifting tectonic plates. Depending on the speed and direction of move-ment of those plates the rising of deep melted material end giving us isolated volcanoes, archipelagos or aligned islands. For example, the main Tristanian Islands are about 20nm apart from each other and they are all related with different times of activity of the underlying hot spot. Nightingale is the oldest in the archipelago with an estimated age of 18 million years, Inaccessible is dated at 5 MYA, and Tristan is relatively young at 1 MYA.

Seamounts are not breaking through the surface like in happen on those islands, here the volcanic activity have stopped underwater. There are many of them around the planet, up to 100.000, but only a few have received the attention of researchers. But their interactions with the deep currents and the upwellings they produce has caught the eyes for commercial fisheries, as they represent areas with high productivity and produce an aggregation effect on marine wildlife.

Being at about 350nm from Tristan Islands, we have a couple of new additions to the variety of birds that were flying around us during the last days. Today Giant petrels started to show up again, together with Black-browed albatrosses. Soft plumaged petrels also join the bird gathering and surprisingly several of the small White-bellied storm petrels flutter over the surface. Those, similar in size and habitats to the rest of storm petrels we have seen so far (Wilson and Black bellied) are mainly seen in the Indian Ocean, but also in the South Atlantic. About 100.000 couples of them breed in the South temperate islands. Huge Wandering albatrosses keep teasing us to bring out on deck cameras and big lenses, but they seem to know about it and look like they keep their distance when we gather on the Poop deck to take pictures. Smaller numbers of Yellow nosed albatrosses also keep up with our progress.