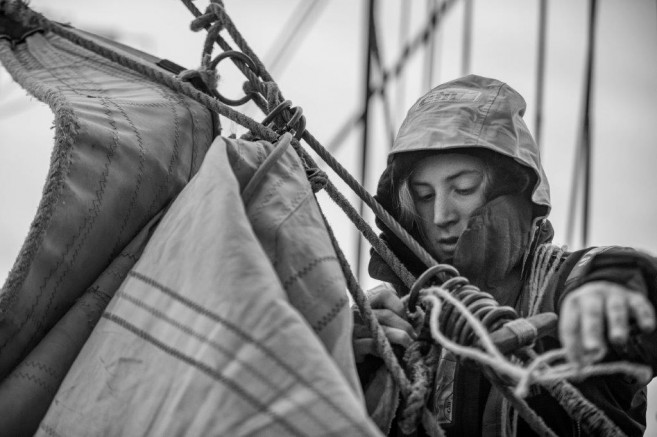 With the wind acting according to the available forecasts, now being pretty steady blowing around 25kn and slowly backing from N-ly to NW-ly and WNW-ly, right after midnight we gradually start setting more canvas. Still we experienced some gusts and ups and downs when we cross paths with some squalls, but on that occasion, menacing as they look in the ship’s radar, they bring mostly rain but not much wind bursts. All an all we started to have fair winds to change our course, now steering on a more NE-ly direction, at about 30 to 35º, adding to the sail configuration the Upper Top Sails and Inner Jib first. Afterwards, still in the darkness but already getting close to dawn, we set the Fore Course. The first lights of the day find us aloft unfurling Main Course and Top Gallants. Although from time to time big swells still wash our decks, luckily for all of us, and also for the ship itself now feeling happier performing better sailing, the sea state has been slightly calming down. That tendency will keep on for the rest of the day, allowing for a more comfortable and speedier ride. However, during the morning the low temperatures of about 5ºC, the cloudy skies and occasional rain make for a hard time on deck while on the wheel, doing the lookouts or helping to set sail. Like this, before breakfast the Outer Jib is hoisted, helping with its good pull on increasing our speed. As the afternoon goes on, the good sailing conditions kept us busy on deck. One step after the
other and with the help of many, the braces are pulled between Beam and Broad reach, courses foot are stretched with the whisker poles. The remaining canvas is set: Royals are clued down; Middle Staysails and Upper Staysails are hoisted. All but the Vlieger that shows some damage and had to be bended off and taken down for repairs. Another sail in need of some stitching was the one we thought about to replace the ripped Dekzwabber, a spare Jib. First Adam spend some time sawing it on the Sloop deck and once it is been taken care-of, Beth and Lex work together bending it on. Right before dinner it could be set once more, just when the cloudy day surprisingly ends with a beautiful sunset. By then, the wind had backed to W-ly, blowing about 20 to 25kn, and our course now is 30º, heading on a more N-ly direction towards Tristan, now 1172nm away from our 20:00h position, after having gained 112nm during
the last 24h. Abating winds and swells made for those 24 hours to be calmer and easier. Today was bit of a less challenge to move around the ship comparing with yesterday’s heavy rolling and heeling. But that is the exigent nature of those unsettled, wild and stormy seas. Now we can all easily comprehend that many of the discoveries made in the old times on those high meridional latitudes were as a result of ships being blown off their traditional routes in more northerly areas. Amongst them Anthony de la Roche, probably the first navigator who sailed these treacherous waters where we find ourselves at the moment. In the 17th Century, after hitting heavy weather when rounding Cape Horn on his way to Brazil, he braved the storm ending up much further Southeast than expected, being the first human to catch sight of South Georgia Island. Looking for shelter on this newly discovered land he spent one night at anchor at one of the southern bays, probably Drygalski Fjord, before resuming his sailing. Yet another surprise was on his way heading NE, when he came across another uninhabited island. There the trading trip that ended up being an exploratory expedition, found food, water and
refuge for about a week. They had just landed at Gough Island being the first ones on doing so. But, laying close to Tristan da Cunha small archipelago, Gough had already been previously sighted at the distance by the Portuguese navigator Goçalo Álvares in 1505 or 1506, on a mirroring chain of events like South Georgia. 100 years after this trip, the more famous Captain Cook followed the news and rumors of de La Roche and set sail to the same area. He found South Georgia and was the first to land, naming and claiming it for Great Britain in 1775.