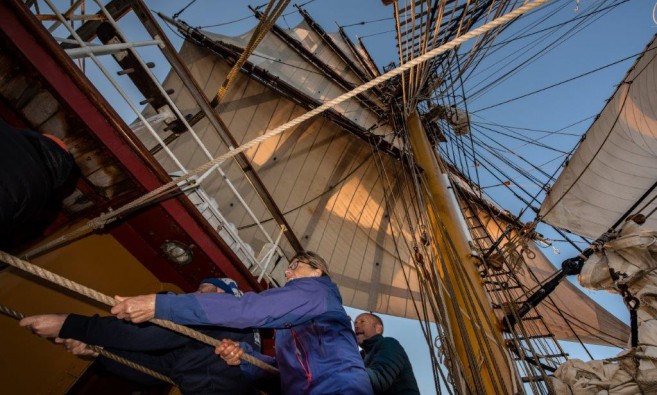 Enjoying the great sailing from last afternoon, some adjustments on the sails and braces had to be done from the early morning. With the wind gradually backing and increasing to a good 17 to 20kn, before dawn we squared a bit more the braces a couple of times, keeping speeds between 7 to 8kn on a course straight to Cape Town. Sunrise met us while slightly bracing once more introducing some more fanning in our yards and readjusting the Course Tacks accordingly. The fanning is introduced to trim the square sails according to the wind shear or in other words, its different force blowing on the watersurface than higher up the masts. The lower yards are braced sharper and further up every yard is braced slightly more square to make better useof the wind. The good weather and steady breeze, made for another day when we could relax on the sunny deck, climb aloft for some maintenance or to take the group picture that Phil, our fellow photographer voyage crew, was so eager to shoot. The journey went ahead maintaining the convenient and fast speed of 7 to 8kn, but sure it is not just due to the fair winds and trimmed canvas that we attain such pace, but also thanks to the surface current running with us. We find ourselves now under the influence of several water masses and currents, and it looks like we are taking advantage of the quite strong effects produced by the meeting of the Agulhas, the Northwards flowing Benguela and West Wind drift currents. The large Agulhas Current is warm (water temperature measured today raised up to 20ºC) , narrow and fast, flowing down the East coast of Africa from 27°S to 40°S. But reaches the southern tip of the continent and interacts there with the others. Here what makes the Agulhas current special is that the larger amount of its water turn back on itself close to Cape of Good Hope, rejoining again the general circulation of the Indian Ocean. An estimated daily flux equivalent to about 1400 times that of the Amazon River moves at a rate of 150 km/day, turning around in a loop with a diameter of about only 400 km to flow directly in the opposite direction. This process does not happen along a clean edge, but in a turbulent mixing flow along the retroflection loop. When periodically it pinches off on itself, releases warm water eddies into the colder South Atlantic Gyre. This process has a major effect on South Atlantic and Southern Indian Ocean dynamics, marine productivity and weather patterns, allowing warm tropical and subtropical surface water to remain in the region for a considerably longer time than in comparable western boundary currents. Increasing the flux of heat and moisture to the atmosphere. Those gyres have an effect on the water surface, wave patterns and local currents, all factors to be considered by the ships in the area and their navigators. Luckily, as with the weather, nowadays satellite observations exist that can keep track and forecast their movements. Those current charts, of course together with the wind forecasts, are of invaluable help to do a proper routing when sailing along the South Atlantic to South Africa, as the speed and flow direction of the surface water on those gyres and eddies released in the South Atlantic can affect the progress of any ship sailing in the area. In such steady good conditions there was time for other activities on board, like having a meeting with our cook Gjalt, that found time to be available for a while to answer any questions related with his job and how to prepare all the delicious meals on board in a trip lasting over 50 days in a sailing ship like the Europa. With 176nm done during the last 24 hours we are getting closer to Cape Town, with just about 292nm left to go. But we are not there yet, still a couple of days of sailing ahead of us, where we can’t change our mindset yet from being at sea to be on land, and concentration is still needed on the steering and lookouts. Nevertheless shortening the distance between us and our destination it was a good moment today for having a talk on Cape Town and its surroundings by Sid and Claire, two fellow travellers in the Europa that are actually sailing home as they live in the city. It is great to receive some first-hand information about our destination, things to do there and places to visit. Out on deck, and putting a bit more in practice what we have learned during the last days on the Navigation and Celestial Navigation lessons, the sunny morning made for taking the Sextants and try to take a Meridian passage sight. Leaving aside the wheelhouse GPS we try to re-enact the mariners using the ancient science of position fixing through evaluating angular measurements between a celestial body (like the sun) and the horizon. Using this method it is possible to locate one’s position on the planet and the tool used as base for such calculations is the Sextant. The instrument represents a highly evolved reflecting device that like others before, use mirrors to enhance their ability to make measurements. Permitting to observe two objects at the same time while measuring the angular distance between them. Its principles where already established by Isaac Newton but it was beginning to be implemented around the year 1730. After several trials and inventions such as Halley’s reflecting instrument, Newton reflecting quadrant and the octant, that used different angle scales, shapes, mirrors and materials, it was Admiral John Campbell who first came up with the idea from which the actual sextants are based upon. And they were first built by John Bird in 1759. Since then, further developments in construction techniques and advanced materials were reserved for the Sextant, which became the prototype of the instruments we still use nowadays.