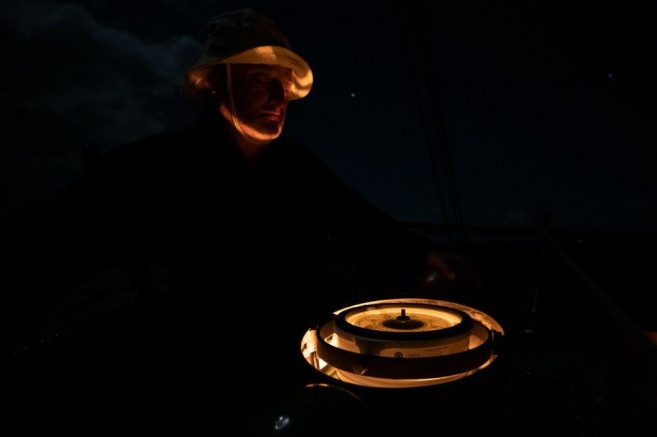 With the South American coast already less than a couple of hundred miles to our Starboard, Europa keeps a 205º course towards her destination, further south in Uruguay.

Steersmen now are keeping the good course having to pay attention to a couple more things than the electronic device rigged in front of the wheel. On one side the sails have to be filled up for the good speed, on the other hand the steering goes through keeping a good eye at the magnetic compass, as the electronic system started to give some trouble and became less reliable.

Despite the modern GPS technologies are of great help on facilitating the steering, are not an indispensable tool, and we are learning the more traditional way of compass using.

The specialized electronic programs and tools based on satellite location center their functioning on measure the distance of the subject from different satellites orbiting the planet, establishing accurate positioning. A great modern and advanced scientific jump to make much easier the navigation over the laborious calculations and the need for a knowledge background of the celestial navigation, and a more precise way to keep a course over the classical magnetic compass. But they are more prone to failure and are not essential appliances, as history tell us with the thousands of years of sailing and navigation.

At the beginning not leaving the sight of the coast, also relying on different behaviors of a diversity of fish and migratory patterns of birds, temperature and colour of the water, sea bottom structure and composition, cloud formations, reading swell and waves. Stars too, particularly one, Polaris. A key star for sailors, that knowing the main ports, its altitude angle above the horizon would remain more or less constant. Easy if your last leg of traveling was due West or East and the altitude angle of Polaris for the destination was known. Then, traveling North or South, once the correct Polaris altitude was achieved it was just left to ‘run down the latitude’ until arrival at the destination.

As the saying goes “anyone can stay on the right path, given the right tools”. Classical reliable tools such astrolabes, sextants and many of the kind, including the introduction of the magnetic compass.

The revolution of the invention of the magnetic compass was achieved in the 12th century. Probably by Chinese sailors, masters of the seas by that time, where the first ones on using a floating magnetized needle in a bowl of water for navigation purposes. A great progress, which was completed in the 17th and 18th centuries when both lines of longitude and latitude could be sketched in maps and charts, opening the gates for the golden age of navigation.

Nowadays, the ship’s compasses consist on a magnetized plate or needle submerged into fluid to protect against excessive swing, improving readability and reducing wearing, set on a gimbal mount.

Port and Starboard of it, two moveable metal balls escort it, and is fixed to deck by a pedestal. Inside it, adjustable magnets. Both structures engineered to counteract and compensate for external magnetic fields.

And while at the Poop deck voyage-crew-watches do a good job keeping a good course under all Europa’s canvas catching the fair Easterly winds, others join Bosun and her sailor’s team on the ever ongoing maintenance projects. Reforms and overhaulings by no means new, but going on for as long as any involved on the ship’s life can remember.

Another task to regularly complete on board is conducting mandatory drills. Today it was time for doing a fire exercise. Right after lunch the rings and bells sounds warned us about it and the crew performed the practice, mustering all on board, running hoses and fireproof suits donning, getting into the area where the fire was supposed to be for extinguishing it successfully.

Later on, down below, Europa’s engineer Merlin, likewise in the Arthurian legend, supporting the Captain and Mate, works his magic keeping up and running the ship’s internal systems, and today showing them to the ones interested. Some curious amongst us follow his steps and explanations through the ship’s dungeons. Engine room, steering areas, mechanisms and complex networks of motors, generators, shafts, pumps, hoses and cables.