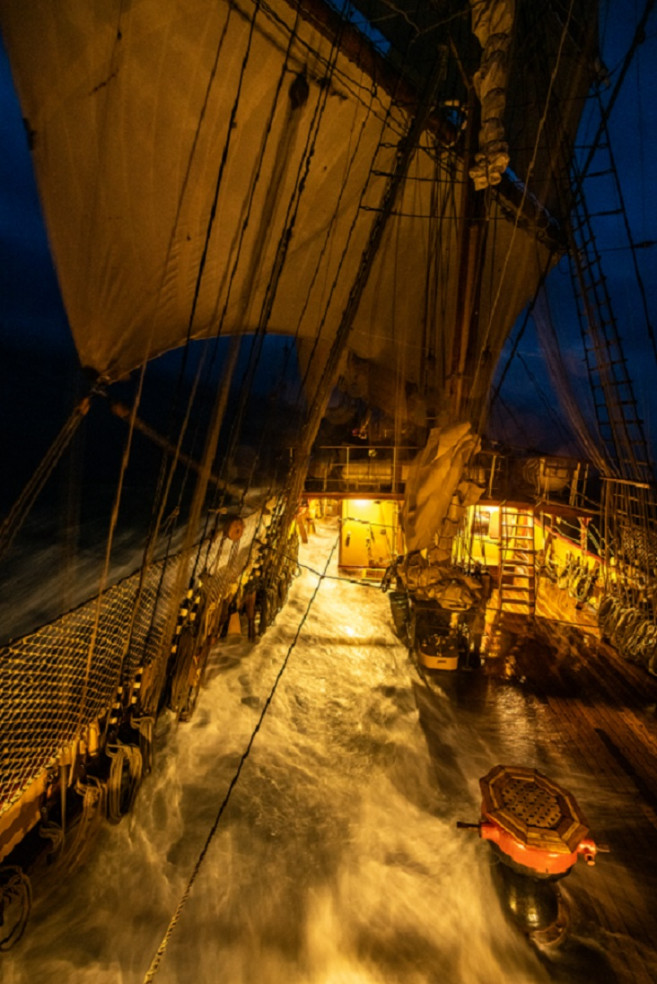 A day of contrasts in the Drake Passage. It welcomed us with its characteristic forceful winds and agitated seas. Main deck was often swept by the swells on the rough weather of the furious 50’s. But the seas here are not always boisterous and stormy. Hard periods combine with easier intervals, rain and dark skies can let the sun shine through. Heavy weather sailing can end up in the ship having to rely on her engines to make progress southward.

The south and west winds lined, and, as they blew waves like a rolling trench before them threw. Sooner than you read this line, did the gale, like shot, not feared till felt, our sails assail.

The conditions Europa face since last night, lasting until mid morning, surely proved demanding for some. Cape Horn lands are gradually left behind, shallower sea bottom fall into the deep ocean. The area where battering winds roar, the ship faces the chaotic seas and the conditions become more severe. The kind of a voyage to overcome challenges, to reach a good sense of achievement at the end of each watch either steering, climbing or setting sail.

Sea sickness strike, for many is hard to eat. Waterproof layers on top other warm garments all tucked down under a harness makes going to the bathroom a burden, while the ship heels and pitches. While standing watch, you are wet most of the time. When going to your bunk, is difficult to fall sleep. Even walking the corridors is not and easy task, not to mention venturing on deck. Hard work at the wheel trying to keep the course and lookouts, now moved from the Fore deck to the Poop deck, withstand the wind and the rain. The way of the Tall ship in the southern latitudes of the Furious 50’s.

Throughout the night the seas ran high and the Westerly winds blow violently with gusts up to a good 45kn. The ship plunged into the steep tall waves, the water pouring in above the main deck railing. In the lee scuppers it washes sometimes to a man’s waist. The rig works and strains in the strong blows and wild sea, pulling the ship under Courses, Top sails, Deckzbabber, Fore Top Mast Staysail and Inner Jib.

Daylight found us under the same circumstances, but it didn’t take much longer for the winds to start abating and the seas to start rolling in larger surges. The lighter weather make for hoisting more sail again, but always keeping an eye to the passing showers that run over the ocean. When the squall strikes, the upper squares are clewed up, the newly bend-on outer jib hauled down, and the ship braves the gusts keeping her way. But if the conditions take a stronghold, hands climb aloft and furl them. As it happened in the afternoon, when after a truce period, the wind backs to Southwesterly gaining force again to 30-35kn. Braces are pulled sharp and the ship sails Close-hauled to the south. Once more a period when the seas often sweep the main deck, the hull pitches and heels sailing as close as possible to the wind direction.

Later on, with the end of the day the particular ferocity of the sea seem to be over. The wind eases down and the decks see hands pulling sheets, easing bunts and clews, hauling halyards. Outer Jib, Top Gallants, the large Desmond are set.
Experiencing the changeable nature of the Drake Passage, late at night, the furious blows from earlier in the day had become a light South-southwesterly 8kn breeze. Not enough to maintain any speed to our destination. With the Courses cowed up and the staysail sheets pull tight, the engines are switched on and push us to Antarctica.