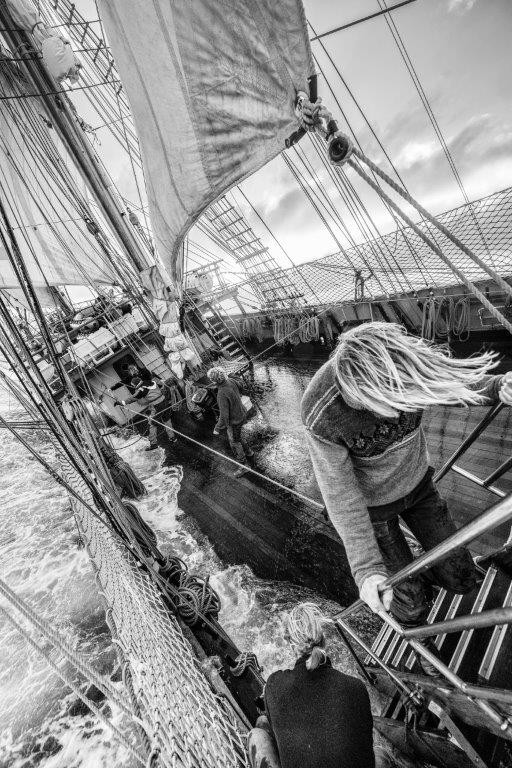 Increasing wind and growing swell made for clewing up and furling the top gallants in the early morning. The 40kn of wind blowing from the NW, cold temperature and rainy skies, spiced the challenging sailhandling and work aloft. During the whole day, Europa sails the raging seas close to the wind, still doing a good speed but at the cost the heavy rolling and heeling to port side. Since departure, the Scotia Sea is paying a good tribute to its stormy and cold reputation. As it cannot be in any other way when we think of the area of the world where we are sailing at the moment: between the
“Furious” 50ºS and the “Screaming” 60ºS, across the body of water between Tierra del Fuego, South Georgia, the South Sandwich Islands, the South Orkney Islands and the Antarctic Peninsula, and bordered on the west by the Drake Passage. The Scotia Sea is home for all those various remote islands, that form what is called the Scotia Arc, famous for its varied geology, wildlife richness and dreadful climate. Under the deteriorating weather and sea conditions, it seems that luckily we left behind the icebergs that sprinkled our way off South Georgia. Drifting on the oceanic gyre that runs clockwise in the Weddell Sea, those tabular icebergs had made their way all the way to the island, and were gradually breaking apart, dropping bergy bits and growlers into the wild waters of the Scotia Sea. Those relatively small ice chunks often cannot be detected by the ship’s radar in heavy weather conditions, and eventually can represent a hazard for navigation hence the need to keep a sharp lookout. Far from them now, but they sure will show up again soon on our southerly course. The straight course set to South Orkneys today started to bend southwards as the wind began backing to the west. No major atmospheric systems are expected to cross our path in the close future, and we still sit between a strong High Pressure located in the North and a deep Low in the South. The corridor between both gives the strong winds from the westerly quarter.