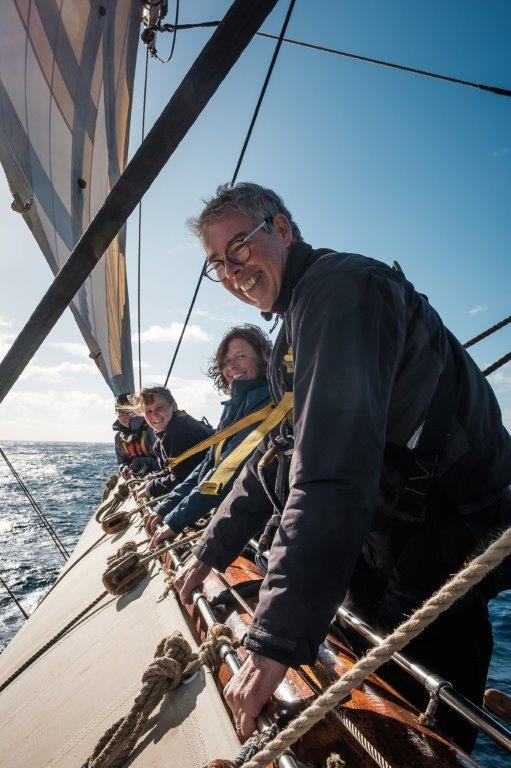 Shifting winds from SSE, E and SSW blowing with variable force were the standard for the first part of last night, all seasoned by some light blasts from passing showers. We sail at about 6 to 7kn on those conditions under Squares up to Top Gallants, but the latter halyards ballantined ready to drop in case of stronger squalls. The braces are pulled on Close-hauled Starboard tack while we continuously follow the changing wind. Just the Lower Staysails and Spanker are also set, but soon the flapping Desmond is taken down. On the head rig the Outer Jib is stowed away. But this situation didn’t last long. For a couple of hours in the early morning wind died almost completely, leaving us rolling in the swell of a windless ocean. Soon a couple of squall lines sweep the sea surface intersecting our path. Situation that augurs a forthcoming wind change. And so it happened before dawn, when seemingly out of nowhere, blows between 18 to 20kn from the S and then backing to SW-ly pull us again at 6 to 7kn on an Easterly and ENE course, following the wind without having to touch the braces. Desmond is soon set again to help on our progress. With the sun low in the horizon, but already shining over the clear skies we set more canvas. Royals, Middle Staysails and Outer Jib are unfurled and hoisted. Now the wind blows from the SE and we cannot sail on more than a course of 40 to 45º, still on the same tack and point of sail that will keep for the whole day. In the afternoon the wind kept changing, now backing to E-ly as we keep adjusting our course just keeping the sails full and working, maintaining the apparent wind edging the 60º. Like this our course is gradually deviating towards the North. The combination of sailing braced sharp on Starboard tack but at the same time riding following seas, made for a bit awkward movement of the ship, most noticeable when standing in the aft deck or steering. Following those winds we have been diverging from the once planned course southwards to catch betee W-lies down at 40º South. Going with the wind since starting our way from Tristan have proved to be not possible to follow that route. For that purpose we would have had to motor our way Southwards. Anyway the forecast indicates that soon the wind will turn to became a steady  E-ly and will keep fluctuating a bit back and forth before actually becoming N-ly. At the moment  we still steering on a course that will keep us on those variable wind latitudes for approximately another day, but then we will have to take advantage of the wind coming from a N-ly quarter to make our routing proper to Cape Town. As such, until now despite of finding ourselves on latitudes similar to those of Tristan, forced by the variable winds experienced during the last day to not reach the Roaring 40’s, we kept sailing under relatively good breeze making about 100nm towards Cape Town in the last 24h. The good sailing conditions together with the warm and sunny weather made for the crew to offer what was called “Advanced Climbing Instructions and Rigging Exploration”, where the ones of us that needed bit more confidence or were willing to climb higher than they ever did on our rig, or step onto the yards’ foot ropes could enjoy a nice time, assisted by crew members on their evolution aloft. Not much sailhandling was to be done during the day, so we all entertained ourselves out on deck under the sun or attending to the talks offered by our guides. Richard kept going with his constructive photography critics on the shots presented on the past photo-competitions, providing a good chance for learning how to improve our shots. On the other hand Jordi introduced us to the scientific work done on the Humpback whales that feed in Antarctic Peninsula and Southern Patagonia. For several years he has been collaborating with the Chilean Antarctic Institute and the Quaternary Research Centre based in Punta Arenas on projects with those whales, where photo-identification by their flukes and obtaining skin samples for population genetics work has been the main goals. The day ended with yet another stunning sunset, photographed by many. This time even the so called “Green Flash” could be seen as the last rays of sun disappear below the clear horizon. The small segment of the upper part of the sun’s disc, which is the last to be lost to view, may turn emerald-green or bluish-green at the instant of its setting, like it happened this evening. Usually it just lasts only a fraction of a second, which is the reason for calling it the “the green flash”
The best explanation for its occurrence tells that is produced by the last rays of sunlight emanating from the upper limb of the sun, at sunset, being refracted in the atmosphere before reaching the observer’s eye. From all wavelengths that compose the white daylight, the shorter ones which appear as violet, blue and green light suffer greater refraction than the orange and red longer waves.
When most of sun’s light is cut off by setting below the horizon, still the light of these shorter wavelengths is usually being scattered by its horizontal passage through the lower atmosphere.
Although mostly observed at sea, the oceanic horizon is not essential for seeing the green flash; it may be equally well seen when the sun sets behind a distant land surface. But in any case is most likely to be seen when the air is relatively dust-free, and without mist or haze.