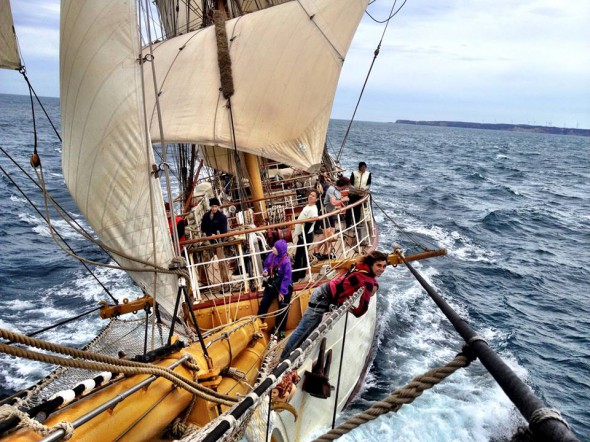 Several hours had passed motoring at slow speed of around 4kn using one of our engines. The motorsailing started yesterday on a light variable breeze, as we wait for the wind associated with an upcoming low pressure system to catch up with us. Already during the early morning dark hours the light wind turns to the NE and in the morning veers to N, but still just blowing 3 to 8kn. From last night we are braced sharp on port tack waiting for this shift in direction and a considerable increase.

The change started to happen gradually from after breakfast onwards. First we add the topsails to the middle and upper staysails that were previously set, then as the morning advances we end up setting all our canvas with the exception of the fore topmast staysail and gaff topsail. Still under steady conditions and blue skies, lunch is served on deck, while the Europa heads straight east at over 6kn of speed. Once lunch is finished the wind slowly picks up during the rest of the day and we still keep the same sail setting. We are sailing close-hauled and increasing our speed to above 8kn, in N by E winds between 15 to 20kn, while the skies become more cloudy and the atmospheric pressure slightly drops. The forecast tells us that the wind situation will still last for a while, at least until tomorrow, and it will even increase more, as it turns W. Great for our routing, as soon we have to start steering on a more north-easterly course towards Cape Town.

Favourable conditions allowed the crew and a few of the voyage crew to keep going with some maintenance projects and continue preparing for one of the big jobs to do during our dry docking period in Cape Town, the replacement of all stays on our jib-boom. Natalie also takes the chance to rig the skysail yard on deck to show us proper furling and unfurling techniques.

The forecast indicates an increase on the wind and a shift to westerly winds for tomorrow afternoon as the low pressure we are riding overtakes us, leaving behind a calmer area with more wind shifts as we get closer to land and the high pressure system sitting west of Cape Town. We better use these next couple of days to enjoy the great sailing and pick up a bit of speed before entering on that variable wind area closer to land.

Besides the sail training talks and hands-on, our guides also continued with their lectures, today was time for Annukka to talk about the wind systems of the Earth. Her talk is basically divided in two parts. The first one is dedicated to the sailors and explorers of the 16th century that determined the predominant winds in the oceans. During the second part she talked about the atmospheric systems that control the winds on our planet at large scale. Eduardo shared with us his lecture about Plastics in the Ocean. An eye-opening discussion about the problem that the plastics are causing on our planet and its oceans in which he addressed the global issues concerning plastic debris that end in the oceans of the world. The talk begins explaining why the miss-management of plastics are a potential problem for our oceans. Eduardo mentions the properties of plastic and how this material, being indestructible, has permeated and polluted the four corners of the world, mainly in the oceans affecting the chemistry of the water in the ocean and all the forms of sea life. A complementary activity after this talk was playing the documentary Midway, showing the consequences that the North Pacific Garbage Patch has played in the sea birds of that island.