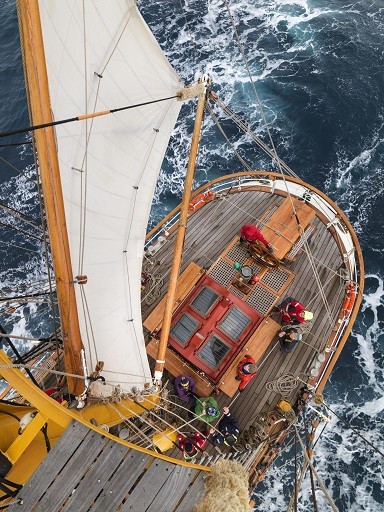 During the night several icebergs start appearing in the radar. Europa sails quite far north from Antarctica and we are leaving South Georgia behind, but still we are in Antarctic waters, eventhough the surface water temperature starts rising from 3.4ºC to 5.2ºC during the morning.

During the night several icebergs start appearing in the radar. Europa sails quite far north from Antarctica and we are leaving South Georgia behind, but still we are in Antarctic waters, eventhough the surface water temperature starts rising from 3.4ºC to 5.2ºC during the morning.

Meaning that we are approaching the Convergence zone, probably crossing it today. But still sailing on those latitudes getting closer to the 40º´s many icebergs, bergy bits and growlers surround us, making the lookouts be concentrated and aware of the ice that we may find on our way. Probably all those icebergs hang around the interphase between cold Antarctic waters and the temperate waters from the North, where the two water masses meet, ant the Antarctic Intermediate water is created as it sinks under the sub-Antarctic one, making a frontal and instable area around those latitudes surrounding Antarctica, and a bit further South in the Drake Passage.

Last night the wind seems to be more stable around 20 kn, and slowly veering more to the West. We are at the Eastern edge of a High Pressure system, while the low that has been with us already passed South of us. Under these conditions in the early hours of the morning we set the Royals. As the day goes by, sailing already with the first daylight we gybed to port tack and set the Mizzen Top mast staysail, our course is now 35º to 40º. Later on, after coffee time, when Jordi was supposed to have a talk on the birds of the Southern Ocean and the endemic species of the remote islands that we visit during our trip, there was sailhandling to do. The lecture was postponed while we set all the rest of the canvas and braced the yards to Beam Reach, still on Port tack. The “old Lady” rides the Southern Ocean on a 035º course, under full sail, on 20 to 25 knots of Westerly winds.

But later on Aaron gave his second talk on Navigation, with great attendance, and to be repeated tomorrow. During the work on deck setting the rest of our sails, it was a good opportunity to practice our skills, while the permanent crew supervised the whole operation. Some of us slowly we are getting to the point of knowing how to organize the watches to set canvas, and the sequence of ropes to pull or let go.

During the afternoon we braced a bit sharper and on our great sailing still have to deal with more icebergs and fields of growlers. The wind is been easing down to 17-18kn and has veered all the way to the West. Our speed is of good 8 kn on a 035º course. From noon to noon our progress towards Tristan da Cunha has been of 169nm and 1015nm to go.

Please pass my regards to Brian Railton, a volunteer crew member. Tell him, I'm watching his every move from afar. You can run but you can't hide!! David