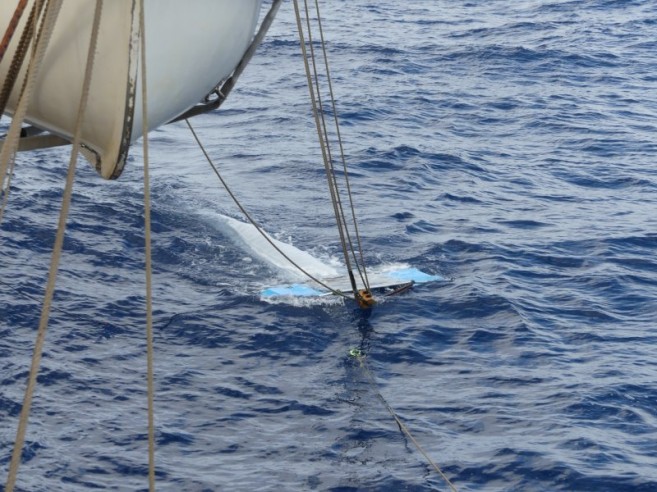 After a little getting used to the ship (aka. seasickness) we got
started on our plastic sampling. The very inventive crew built us a nice
construction that allowed us to deploy the manta trawl on the leeward
side of the ship - she went like a beauty! Together with the voyage crew
we decided it was fitting to christen our new baby, and at our next
trawl we baptised her ‘’Samanta’’.She has been working absolutely
perfectly. Many thanks to the permanent and voyage crew for their
assistance and interest in our project!

Our initial results from the manta trawls have been interesting. As
expected, the amount of plastics found in the Southern Atlantic is
relatively low, but still we did find some microplastics in all trawls.
What is interesting is firstly that the amount of plastics gathered
seems to be steadily increasing, although it might be too early to be
confirmed. Secondly we see that the sea life present in our samples is
also gradually changing. Our first few trawls consisted mostly of Salps
(translucent marine invertebrates), /Physalia physalis /(Portuguese
Man-o’-War) and /Velella velella /(‘by-the-wind sailors’), whereas a
trawl later 95% of salps were suddenly replaced by tiny blue arthropods,
a crab and a small fish (only 3mm long!) All will be identified as far
as possible in due course... It is likely that the change in ocean life
and amount of plastics sampled seen in these trawls is related to the
fact that we have entered a new current. The lack of salps certainly
sped up the process of filtering out the plastics! All biological life
in our samples has been and will continue to be photographed and
analysed by Jess, and we hope to be able to keep you up to date to what
we find. We have also been observing larger plastics on the sea surface,
kindly assisted by the voyage crew on their look-out duties. The last
couple of days we seem to have encountered more pieces of plastic
floating by: so far we have identified a fishing net, some pieces of
Styrofoam, a buoy, a rubber film and some plastic bottles.

On the marine biology front, as mentioned, Jess has identified a number
of species brought on board by SaManta, and also organisms that have
made their way into the seawater filter for the ship’s osmosis plant.
These include mussels, barnacles and goose barnacles, as well as a few
other bivalves and arthropods. After an introductory talk on our
research aims (sparking loads of interest, discussion and enthusiasm),
the first science talk was delivered yesterday by Jess, entitled
‘Bioluminescence’ which went well and caught the attention of the crew,
especially those who have witnessed the phenomenon during the night
watches illuminating EUROPA’s wake. Dolphins and whales have made a
brief appearance and the swells are consistently skimmed by the
shearwaters, petrels and various species of albatross. Oceanography
research in the form of sea water temperature and meteorological
observations have been taking place twice daily and samples of seawater
collected for analysis (focussing on salinity) have been taken. The
research continues…

So our initial result is: with entering new currents and travelling
north, we see a very slight increase in the amount of plastics sampled
and observed. However expected, it is very interesting to notice the
difference. We expect an increase of plastics found during the voyage,
especially when entering the Northern Atlantic Gyre, with a decrease of
plastics in between the North and South Altantic Gyre (around the
equator). The diversity of marine life is increasing and the water
temperature is warming… we’re destined for hotter climates!