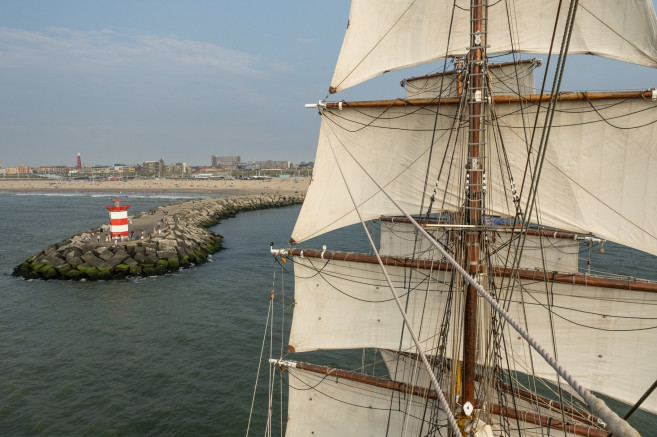 Two months moored alongside Scheveningen Port reached their end today on Saturday the 15th, when, after breakfast, the permanent crew (which components increased when some of the old crew members embarked the ship yesterday, some for just the weekend, others for longer period) climbed aloft to unfurl and prepare all our canvas for a day-sail.In the meantime a handful of invited people related to our ship, embarked as well to enjoy the day on the Europa. The journey out at sea was to be shared with our friends on board their ship, Clipper Stad Amsterdam and the KNRM Scheveningen.

The light wind that blew during the whole day helped to enjoy a quiet nice sailing up and down the coast, being just a bit busier in the morning when some Rescue at sea excercises were performed on board both of the ships. Then, Official speed and Rescue boats swarm around and come alongside while over our heads a helicopter joined the maneuvers. Once done with it, we found ourselves close to the Stad Amsterdam, now starting to set more sail. Launched in the year 2000, she is much newer and bigger than us, reaching a faster speed as soon as almost all her canvas catches the afternoon breeze. But following the good reputation of a sailing ship that the EUROPA has, we managed to sail for almost the complete day.
Even while returning into Scheveningen harbor, when attentive crew members to follow Captain’s instructions, gradually dropped sails in the appropriate sequence as we get closer to the moorings. Engine and Bow-thrusters just started at the last moment, to turn the ship around and approach the pier, for our last quiet night at Scheveningen, and a last chance to share a drink and hang around at the beach with our new acquaintances from the Stad Amsterdam.

In following morning all is ready again to set sail to Zaandam where we plan to spend a shipyard period. It was about to be the last time in weeks for the crew to pull on halyards and sheets and set all our canvas to head off, embracing the open waters where all our problems seem to be left behind.
Making way northwards to our destination along the Dutch coastline, the light E-ly breeze, made necessary a push from one of our engines to maintain some speed, motorsailing like that until before lunch, when the crew was busy again clewing up the Square sails and sheeting down the Staysails. Easing head winds made for our engines to work harder during the rest of the day until arriving to the shipyard where, if all goes as planned, our mooring lines will be cast off again in about a month. Then a different time will start for the ship, facing the unknown period until we can sail again. When the world looks like has fallen, leaving everybody confronting different ways of dealing with the COVID-19 pandemic, quite an open and uncertain future stretch in front of us. Nevertheless new plans and ideas are starting to be laid up for the following months and next year, hoping for the world to see soon again some light, after the wicked times we are living at the moment.