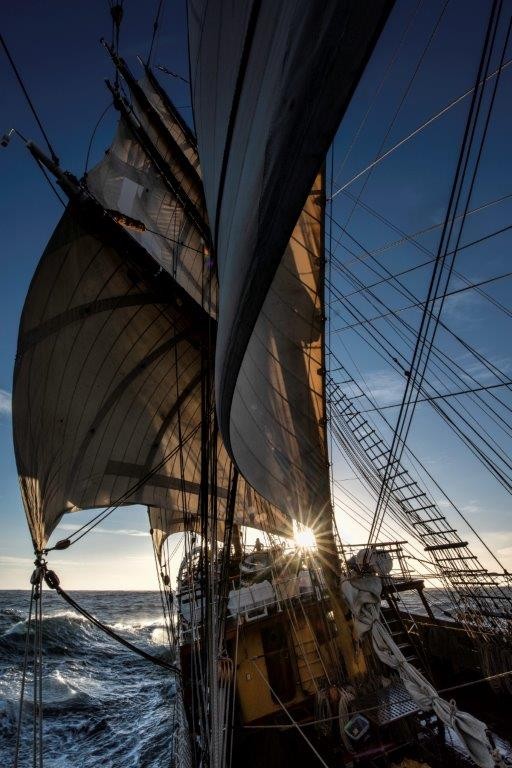 Our return to the sea after a fantastic week exploring the amazing South Georgia Island started with a night of sailhandling, that led to a stable sail configuration when we finally got out of the lee of South Georgia. The variable winds changing all the way from SE-ly to NW-ly blowing with unsteady force, late during last night got stronger and blew steadily from the West. Time to brace sharp on starboard tack and fight against the strong current, taking advantage of the almost 40kn of wind to sail on a southerly course. The early morning light found us setting more canvas when the W-ly wind
eased a bit to 25-30kn. Courses and Top Gallants are sheeted down, pulling us at about 6kn on a 195º course. Later on the dekzwabber was set together with the inner jib, that before was in need of some repair. Once we got it set, Europa rides the Southern Ocean rough waters under the same sail configuration for the whole day. Along the journey the wind is gradually veering from W-ly to north-north-westerly and we follow with adjsutments to the course, staying close hauled and progressively heading further to the SW, steering relatively high in the wind on a good course with the idea to
reach South Orkney Islands. The forecast for the wind conditions does not seem to change in the immediate future, promising similar sailing conditions for the next couple of days. Actually we are enjoying a thrilling ride, tough and making life on board challenging. With a heavily heeling and rolling ship every movement has to be premeditated and thought about before performing it. Dressing up takes longer time, first running after flying clothes in cabins and corridors, walking on deck becomes a necessary adventure and turns out to resemble a Russian roulette game with decks swept occasionally by the breaking swell. For some, taking a shower seems out of question for the moment, a demanding process looking like adopting difficult yoga-like body postures to wedge ourselves in the bathrooms. For many it is again difficult to keep their balance… or the food inside their stomachs. Indoors, Europa’s already traditional small yellow buckets are distributed to take care of it,
while out on deck more than once we can hear the shout: “Do it downwind!!!!”, often too late… as seasickness strikes again, less people show up for meals or even watches. Sea legs have to be worked-on once more, after apparently losing them while enjoying hikes in South Georgia. Overcoming all the inconvenience, our galley heroes Gjalt and Sasha keep feeding us with their fantastic
meals, not easy to cook under those conditions. With all that exciting sailing, by diner time we had covered 105nm since departure from Gold Harbour, just 370nm to go until reaching the northern coasts of South Orkney, if winds allow us to visit them.