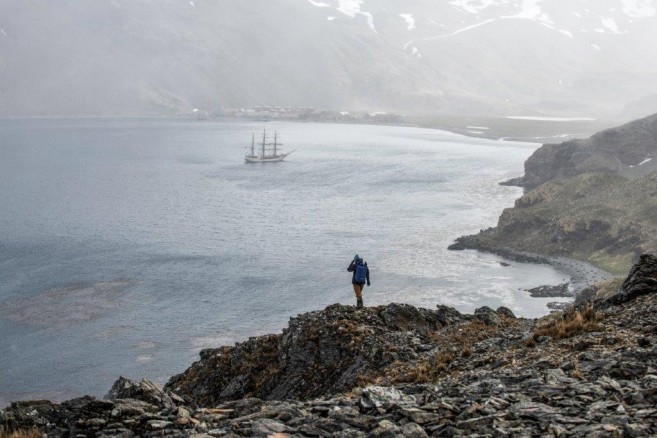 Possession Bay offered a good anchorage despite the gusty strong winds that hit the bay overnight. With some occasional dragging, Europa endured the stormy weather with five shackles of chain in each of our both anchors. Early in the morning, and under easing winds and an improvement in the meteorological conditions, we made our way towards Fortuna Bay. With the wind in our back the ship rolled heavily for a good couple of hours before changing course and entering the legendary Fortuna Bay. Once there, there is not much shelter to be found, and there is not much good anchorage available. The conditions are good enough to keep the ship drifting while we assess the landing possibilities and all get ready. After our guides have a good look ashore, they give the signal to start loading the zodiacs for the landing. The activity planned for the morning is worth enough for a rough landing through the surge on the beach. Under a snowy drizzle and variable skies we were about to face the famous last bit of the Shackleton’s walk across the hills between Fortuna and Stromness Bays.

Disembarkation wasn’t the easiest one though. Long wave rollers made us act quickly, while crew and guides ended up chest deep into the cold waters, providing safety to the rough conditions of the landing site. Nevertheless those are quite common conditions in the island, famous for its swells and winds. Getting wet feet was a low price to pay to greatly enjoying the much anticipated Shackleton walk. Up the grassy hills, we could have a good look to the other side of Fortuna bay, the place where Shackleton, Worsley and Crean came down after crossing South Georgia. To reach Fortuna they managed an epic walk over the heavily glaciated interior of the island, but here they came down to a bay where there was no whaling station to be found. A couple more hours of easier hike would lead them to salvation at Stromness. Tired but knowing that the end of their struggles for survival was close, they kept marching over the snowy terrain. Once at the Stromness whaling station, Shackleton made all possible efforts straight away to try to reach his stranded men at Elephant Island. But he didn’t succeed until approximately four months later. After a steep start some layers of clothing had to be peeled off, just to dress again when we stopped and the wind blew hard over the rocky ridges. Over easier barren landscape, as we make our way up, now and then we look back at the Europa leaving the bay. They will pick us up in Stromness Harbour in a couple of hours. Even though the drizzle and hazy skies didn’t clear up, we made it to some great viewpoints where we stopped and reflected on the struggles endured by Shackleton and his men, who left a deep mark in the history of South Georgia. The König and Fortuna glaciers could be seen. A good observation of them revealed how they shaped the landscape and how much they have receded during the last century. Next stop was at Crean lake, still frozen from the winter season. It was here that Tom Crean broke through the sheet of ice covering its waters, and got even more cold wet and miserable then he already was, just when the end of his toil for survival was about to end. He got out of the water and the only thing to keep doing was to walk the last bit to Stromness.

At the side of the lake, behind rocky outcrops to protect ourselves against the chilly winds, we took time for some seedless, fruitless, meatless but nevertheless delicious lunch, before we continued our way, now all over snow fields. A short way led us to the saddle where Shackleton and his men once stood, and listened to the sound of the steam whistle calling the whalers to work, making like this sure that they were on the right way to Stromness. It was 17 months ago since they had heard a sound from the outside world. This sound meant that there were people close by, it meant that they would be safe if they could reach it. And so did we, leisurely walking to the saddle between the two bays. Now a steep descent over a snow patch separated us from the large outwash plain leading to the whaling station. Before reaching it we all did a quick stop on a small Gentoo penguin colony just under the steeper slopes. Here they always breed quite far inland, building their nice nests of grass. Finally Stromness becomes visible amongst the mist, but still we made a short detour to pay a visit to the steep Shackleton waterfall, where we took a rest and took some pictures of this other epic landmark. Here Shackleton with his two companions, Tom Crean and Captain Worsley lowered themselves down with their last bit of rope they still had over the frozen waterfall. They were surrounded by an icy and snowy white landscape, very different from todays. Now just a short flat walk led them to Stromness. They had walked for almost 36 hours, after spending 16 days in a tiny boat on one of the roughest seas in the world, and living for 17 months on the ice. While recalling those stories, and hiking this last bit to the beach, Europa had sailed around and now appeared in the bay.
Soon zodiacs were picking us up next to the whaling remains. Even though Stromness was a rather small station, its remains gave a clear idea of the scale the whaling industry once had here on South Georgia. It only operated for about 20 years before it was turned into a shipyard for the nearby Leith station. Many huge bronze propellers, chains and masts left behind are still witness of this last period. Once on board we were welcomed by warm soup and freshly baked bread. But shortly afterwards three bells rang, calling for a gathering before starting the afternoon activity. The guides proposed to follow an old whaler’s path that joins together Stromness with Leith harbour, where the largest whaling station on the island was located. This pleasant route brought us uphill to a great viewpoint over the bays that host both whaling stations. Europa lays in front of Stromness, ready to heave anchor and make her way to Leith to pick us up. A picture that reminds of the old times, when similar ships worked the harsh whaling conditions in the area. Before heading straight down to Leith Station, we make our way towards Hansen Point, in the south-east side of the harbour. On top of this headland lies a well preserved weapon that was allocated here in 1941 during World War Two. Soon after we embarked Europa again the Captain chose to move the ship to Jason harbour, looking for a good anchorage for the night, close to tomorrow’s landing spot, Maiviken for another day of adventures in South Georgia.