The forecasted strong winds took a while to hit us, but Europa was prepared to hold her ground sheltering in a good anchorage off Darthmouth Point in Cumberland East Bay. In windless conditions we drop 5 shackles on both of our anchors last afternoon, and it was not until during the night that the wind suddenly increased. And it came quickly blowing at 40kn, rising to even stronger and gusting 55kn at the same time turning from E-ly to S-ly and SW-ly.

Anchor watches were busy last night keeping a sharp look at the Europa turning around on the variable strong winds. Trying to stand our ground on two anchors may end up in a problem turning with the wind and have the chains twisted upon each other. To avoid ending up like this, we could hear the engine roaring in a couple of occasions to turn the ship. All went well and by breakfast time crew started with the long process of hoisting one of the long chains resting on the 25m deep sea bottom. The other one will still hold the ship for a while, withstanding gusts over 45kn, on standby waiting for the wind to abate and have better conditions for sailing to Ocean Harbour, our next planned destination.

The morning at anchor was used by the crew to keep going with some maintenance projects, while Arnoud had a talk on the “Life of Ice”. There he explained that the glaciers are part of the hydrological cycle. This describes how water from the oceans evaporate, create clouds and precipitation and surface water that flows back to the ocean, closing the cycle. Glaciers consist of snow that is compacted under its own weight. The mass of all the ice in the glacier starts to move downward under the influence of gravity. As the ice reaches warmer areas, or reaches the sea, it melts and the water is returned to the ocean. Many glacier types exist each having their specific life cycles. Some flow faster than others. Climate change has a significant effect on the average length of the glaciers world-wide. It was great to receive some more information on the glaciers, as we have been seeing them from Antarctica until South Georgia. Actually, having a look out on deck, several of them can be seen rumbling down the high peaks to the sea.

Still at anchor on those beautiful surroundings, we are all eager to give a hand on deck when the wind gusts seem to slightly calm down after lunch. We don’t lose a moment to unfurl some canvas, while the 5 shackles of chain are being hoisted.

Under 25 to 30kn of wind, first Dekzbabber is set, followed by Inner Jib and Fore Top Mast Staysail. Once the ship has turned around and we are facing northwards, Spanker, Lower first and then Upper Topsails are hoisted.

Fair winds push us pretty fast along the 20nm to cover until reaching Ocean Harbour. Sun shines on blue skies adorned with incredible high clouds. Indicating strong winds in the upper atmosphere, spectacular lenticular clouds develop during the day, leaving down below clear skies and amazing views over the mountainous and glacial landscape of South Georgia.

When it all looked like we were not going to have time enough for an afternoon activity, we just arrived at Ocean Harbour. Quickly boats were made ready and Captain together with guides come up for a plan to get off the ship, taking advantage of the couple of hours left till dusk.

Two anchors are dropped over the rocky sea bottom amidst the kelp, to better secure Europa’s position while we are conducting our late afternoon activity.

Ocean Harbour used to host a whaling station as well, like many other protected bays of the northern coasts of South Georgia. But here, the lease for this harbour was the first one to mandate the use of the whole whale to extract its oil, not just the blubber. This process was difficult on board factory ships, but could be accomplished on land with the use of high pressure boilers, requiring lots of freshwater as well. Ocean Harbour fulfilled pretty well all the requirements, and in 1910 a shore station was already processing whales. A year before already had arrived to the area the ship Ocean, after which the bay took its name. The first Station Manager was Carl Anton Larsen’s brother, Lauritz. Carl was busy as well starting his own operation at Grytviken. Although the station was very successful, it was dismantled after 10 years of service, when the two Norwegian companies with leases at Stromness and here in Ocean Harbour, merged together, and decided to keep just one of the facilities. At this point practically all of Ocean Harbour equipment was moved to Stromness.

As a reminder of those old times and activities, a hut remains inbetween several small artifacts and even a ruined steam locomotive. But amongst them and most spectacularly, here lay the picturesque shipwreck of the Bayard resting on the rocks close to shore, one of the highlights worth a closer look when visiting this area.

She was built in the Liverpool yards in 1864, and like the Europa nowadays she was rigged as a Bark. Bayard operated in South Georgia for several years until finishing her life in the year 1911 at Ocean Harbour, after being blown off her moorings at the coal pier, all the way at the opposite side of the bay. She has been laying there ever since, after the unsuccessful trials from the whale catchers operating here to pull her of her rocky grip. For over 100 years she has been sitting on these rocky shores, surrounded by a huge Kelp forest and countless Fur and Elephant seals. For the same 100 years the Europa has been busy at sea, sharing with Ocean Harbour and the Bayard a sort of connection of the life and death cycles.

We all cruised along her riveted iron hull admiring her construction, with her similarities and differences from our beloved Europa. Surprisingly her Main Mast has collapsed since Europa’s season first visit in December, and now could be seen still hanging half way with its tip dipped in the water.

Everybody got also the chance to step ashore for a while. There the main attractions were the numerous huge Elephant seals gathered in moulting wallows, right next to our landing spot.

The whole visit took place under spectacular skies painted with surrealistic lenticular clouds. They just kept glowing under the outstanding sunset, as we still were ashore or cruising, making for uncountable pictures until dusk, when the last light of the day fades and the moon rises. Time to heave anchors and motor to the neighbour Hound Bay, which offer better anchor ground to spend the night before heaving anchor in the early morning to head toward the closeby St. Andrews Bay. 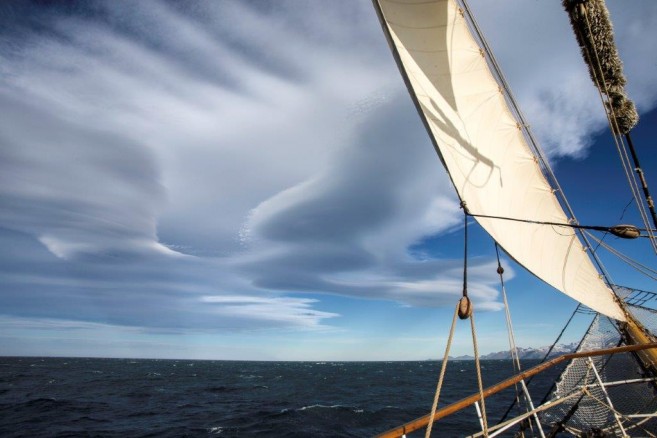 Thank you, Jordi and fellow bloggers for the riveting reporting and magnificent photos. These blogs are especially important to those of us who have a loved one aboard Europa. Keep up the great work and safe crossing to Tristan ! Elisabeth Ottawa, Canada