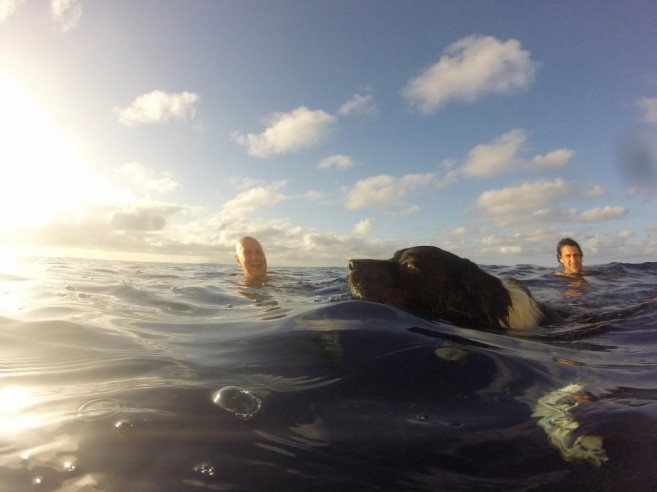 Sometimes called mankind’s oldest picture book, the constellations greet us most evenings. By 2000 B.C., groups of stars were named after shapes of mythical characters, heroes, animals and objects. The brightest star, Sirius, thought to be Orion’s dog, appears in the Great Dog constellation and is known as the Dog Star. Onboard the Europa, Sirius is the name of the ship’s dog. His breed is the Stabyhoun, considered a Dutch national treasure, known as a hunter of foxes, small game and birds. Around a farm they are good for catching rats and moles.

Sirius is nine years old, has 32 offspring and made his first voyage about the age of 6 months. He sails every year with the Captain, going everywhere the Captain goes except Antarctica - where he’s not allowed.

When we boarded the Europa in Cape Town with it’s new crew, Sirius walked up to a few particular people recognizing them from previous voyages, acknowledged he remembered them, then off he went. Occasionally he will pick up a stuffed toy in his mouth and take it to someone he chooses to play with him.  He is particular with people and doesn’t go to just anyone. He’s even tempered, observant, gentle and intelligent. He barks when excited by fish jumping or when he sees a whale or dolphin.  When he barks, we look to see what he sees. When the ship rolls from side to side, it’s funny to see Sirius also rolling attempting to right himself.

On a recent calm afternoon, most sails were taken down and the crew and Sirius jumped in the water to swim. He was so happy, tail wagging, eyes sparkling. He began to swim to the bow of the ship where the current was fast but had to be directed back to the middle of the boat with the swimmers.  When swimming ended, he stood on hind legs, front paws on the deck’s gate hoping to go back in the water.

One afternoon on lookout duty, while standing near the foredeck’s intercom, the switch was accidentally touched and made a popping sound. Sirius suddenly appeared on the starboard side of the deck anxiously searching the waves. In his dog brain, he connected the sound of the intercom and thought... I’d best get to the lookout and checkout what’s going on...don’t want to miss anything.

He makes us smile and brings a bit of joy to the voyage.