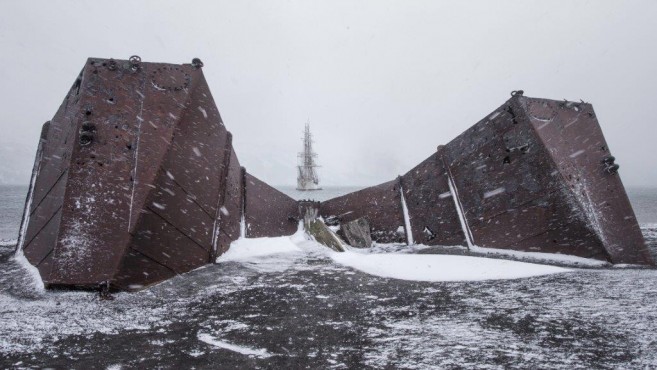 Great sailing conditions were with us during the night, sailing our way towards Deception Island. It was not until after midnight when Europa rounded the southeast shores of the island and sailed into Port Foster. At the mercy of increasing winds and strong gusts over 30kn, sails are clued up, furled by both permanent watches and engines work again as we find ourselves already leaving behind Neptunes Bellows. In the early 19th century, the sealers gave this name to the 230 m wide entrance of Deception Island, for the strong winds that often blow here. Not only it is narrow but also just under the surface in the middle of the straight Ravn Rock is hiding. Many vessels have met this rock, and even the remains of one of them lay ashore at the western side of this gap.

Whalers Bay, where the ghostly Hektor whaling station was settled in 1912, is located just next to the entrance of Port Foster. There we planned to drop anchor and spend the rest of the night, but facing stormy Easterly winds this whereabouts proved to be not a good choice for the purpose. The ship could turn parallel to the steep coast on bad holding ground. Soon we seek for a better anchorage. Located just a couple of miles away towards the middle of the caldera, a seamount called Stanley Patch rises at 25m deep, turning out to be a much better choice. There we drop 4 shackles of both our anchors and weather the stormy period, patiently waiting for an improvement.

The lack of high technological modern amenities on board, luckily allowed for a relaxing day at anchor, enjoying the commodities of our cozy and warm ship. While at the other side of the bulkheads freezing gusts over 50 kn sweep over our decks and rig, we take time for socialising at the ship’s bar, catch up with our diaries and photographs, recover and read this forgotten books we keep in our bunks, peel potatoes for dinner, attend to lectures or learn some sailor’s skills. During the morning, Katelin did a workshop on different sailor’s stitching techniques. Many joined and puts their hands at work making Tiddy bags (used by crew working aloft to carry their tools), or any other kind of purses. Later on, Belén introduced us to her work with whales, mostly in acoustics

The situation also helped to start recalling our adventures during the last few weeks in the Europa. Luckily enough for us, such bad weather didn’t happen often during the trip, but it all brings to our minds stories from the great explorers in the old times, when weeks or months passed sitting trapped in the ice or resilient stormy situations.  All this brought to the extreme during Nansen’s expedition drifting in the Arctic Ocean pack ice in the great ship Fram for over 2 and a half years. Story told by Jordi during his last lecture on sea ice, its formation and the effects on the global climate and its movements depending on oceanographic currents and winds.

It is all part of the game, from the exciting sailing to the unforgettable outings ashore, including sitting and waiting for conditions to improve, all contribute to the Polar trips and exploration experiences.

It was not until late in the afternoon when the gusting winds started to abate, as forecasted, and Europa heaves anchors to make her way to Whalers Bay. Barely a couple of miles afterwards crew was ready again to anchor while all was getting ready on deck for an evening landing.

Before 22:00h we still had over two hours to soak in the haunting beauty of the Whaling Station’s remains.

Hektor whaling station, operated between 1912 and 1931, but the place has quite an incredible historical baggage too. It has also seen secret military operations during the Second World War and research conducted by the Falkland Islands Dependencies, the former British Antarctic Survey.

Once on land we could free roam, enjoying the remains and buildings scattered all around, or climbing uphill to Neptune’s Window. The cold join forces with snowy weather to impose an even eerier atmosphere to this fantastic site.

Neptune’s Window is a great lookout point over the Bransfield Strait. It was named by Lt. Penfold, from the British Royal Navy, following his survey of Deception Island in 1948-49, because weather and ice conditions in the approach to Neptune’s Bellows could conveniently be observed from this gap. The story tells that from here, in 1820,  the young sealer Nathaniel Palmer, was the first one who spotted unfamiliar land farther to the southwest, which would later turn out to be the Antarctic Peninsula.  Others say that the continent had been sighted months earlier by Thaddeus von Bellingshausen, a scientist and explorer sailing for the Russian Czar.

Several whaling arftifacts and scattered whalebones lay over the flat beach, swept by the inclement weather that characterises the island. Two fairly well preserved whaling boats (water boats) act as an eye-catcher on the way between the main whaling station area and the hills behind.

The central building section of the station starts next to the curious “U” shaped floating pier used to repair propellers and shafts from the whaling vessels. A clever system that could substitute the engineering problems, time, effort and money of building an actual port and dry docking facilities.

The constructions, tanks, and boilers have been half buried and melted by the lahar, or mud-ash flow, related with the volcanic event of 1969. And the many whalebones that were covering the whole beach in the old times have mostly disappear as well affected by this same eruptive episode. Oil tanks, high pressure boilers, houses, boats and the remains of the local graveyard are in advanced state of decay, but gives us an idea about the old times and the lives of the whalers here, while now scarce vegetation and a few penguins, nesting Kelp gulls and Skuas have taken over the place, together with the thousands of interested visitors like us, and this evening also the Chilean Navy personnel of the war-ship anchored next to us.

Before returning on board, low tide provide the famous hot waters along the shore that contribute to make Deception Island famous. A few of us decide to take a quick bath on the sulphurous warm beach, and suddenly the black sands welcome a handful white bodies.

Despite the boisterous weather and low temperature, Whaler’s Bay will remain on our minds as a different view over our ideas of Antarctica. Whaling activity here, Falklands and South Georgia decimated the whale populations to great extend, but now, fortunately they seem to gradually recover from those old times and increasing numbers of whales are spotted in those waters.

Through the night the wind dies before start turning from E-ly to SW-ly. Moment that we have been waiting for, to leave Deception and make our way towards the Souther shores of Livingston Island for one more visit ashore before departing towards Ushuaia.