During last night, as we experienced the forecasted weather and wind change, we turned on the deck lights to prepare the ship for the backing winds, stowing away the Studding sails and gybing. 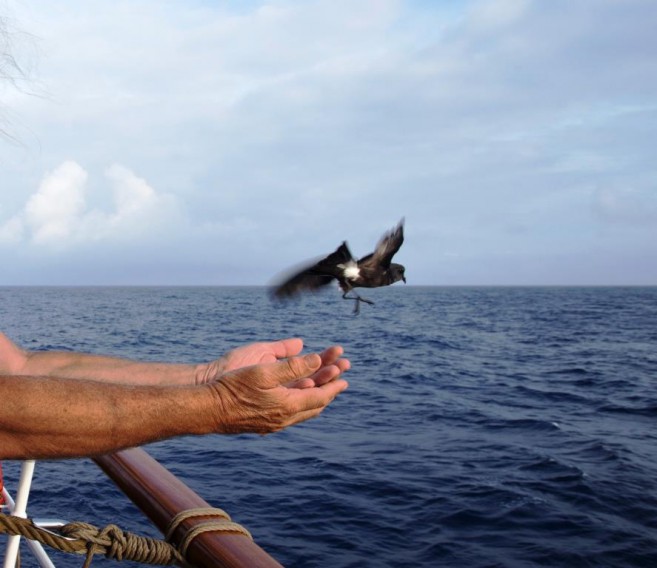 During the operation a Wilson storm petrel got attracted by the lights and ended up falling on deck. Such an incident is not unusual, as many birds, used to the almost total darkness out at sea, when they see a light around, they come closer to investigate, many times finding themselves in trouble with rigging, ropes, windows or any other part of the ship’s structure. Best way to deal with those cases is to catch the bird and put it in a quiet and dark place overnight to recover from the shock, and in the morning, when there is again enough daylight, free them. In the morning Klaas took the bird on his hands to the Poop deck and as he opened them, the Wilson storm petrel flew away. Even though this species breed on high austral latitudes, following circumpolar areas in Antarctica, the Antarctic Peninsula and the Antarctic and Sub Antarctic islands along the Southern ocean, they have huge migration ranges, even reaching on some occasions 77º N in the North Atlantic. Quite impressive for such fragile and small looking bird, but in fact being a tough fellow!

At breakfast time the wind started backing Southwards. Both permanent crew watches were ready on deck to wear the ship, with the help of the voyage crew. People were placed on the different masts and ropes after Klaas gave us an explanation on what we were about to do. The idea is to change all sails from Starboard to Port tack, to change our course, from approximately 145º to 290º, turning the ship all the way around with the wind. After the manoeuvre the wind blows between 17 to 18 knots from the SSW, and we sail “Close Hauled” with the backing wind, getting slowly closer to the coastline on a Westerly course. Following Schouten and Lemaire steps, later during the day we also received a SE-ly breeze and we are sailing slowly closer towards the Brazilian coast, as they also did 400 years ago.