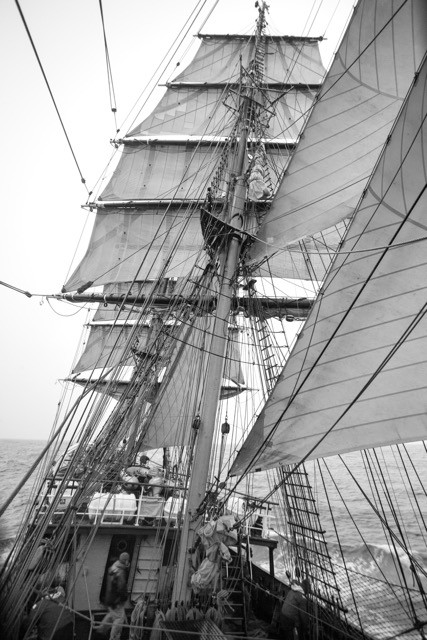 We face the roughness of the Drake from the early hours and for the whole day.

Increasing seas and winds from last night make us start taking sails away. At 22:00h the Royals are stowed away, in increasing winds, and by 01:00h the Outer jib, Desmond, Main Top Gallant and Spanker also come down. A bit later, with the change of watch, the Fore Top Gallant also is taken away. The next sails to be taken down and furled are the Middle Staysails. We sail all day with this configuration. Where she finds her balance between the big swells, with speeds up to 10 knots.

During the day the wind has ben pretty steady around and over 30 knots (Force 7-8), just decreasing a bit in the afternoon and evening, to Force 7. On that conditions the Europa rolls and pitches, heeling to starboardside, making life on board quite uncomfortable. Every movement has to be calculated and though about, if we don’t want to end up flying around and hitting doors, walls, spilling drinks or food. Harnesses became mandatory on deck and watertight doors are closed, as the waves often wash the deck.

At the speed we are doing, we are already North of the latitude of South Shetland Islands, but still sailing on Antarctic waters, with temperatures around 2.7ºC. The way back to Patagonia starts from a higher latitude than our first landfall in Antarctica a couple of weeks ago, when we visited the south Shetland Islands. Now we departed 120nm further South, sailing through Dallman Bay, squeezing between Anvers and Bravant Islands. In the evening we can still feeling an improvement on the wild sea and weather conditions, and we gradually start setting more sails. Outer Jib and Desmond are hoisted.

During the night the wind slowly decreases, stabilises, we have less squalls passing by, and also it starts backing from SW to SSW. Still blowing 25 knots with some 30 knots gusts, but the general tendency is to keep dying down. First Top Gallants and Middle Staysails are set, and a bit afterwards Royals and Upper Staysails. Now Europa rides the Drake Passage northwards, with almost all her canvas set, at speeds of around 8 knots. So far great average for the crossing, with 208nm sailed during the last 24 hours, and already reaching half way to Patagonia. 240 nm behind us and 280 nm to go.

During the day we had a couple of marine mammal sights. Interestingly a group of Hourglass dolphins was spotted, bowriding the Europa, while we are still in cold waters around 2.5º C. This is the only dolphin species that inhabit the open oceanic waters around Antarctica, mostly in the interphase area between the temperate Subantarctic waters and the cold Antarctic ones, around the Antarctic Convergence area, and venturing further South from time to time, like on that occasion. Also a Fin whale is spotted on our way, close enough to be seen by the lookouts between the high swells.