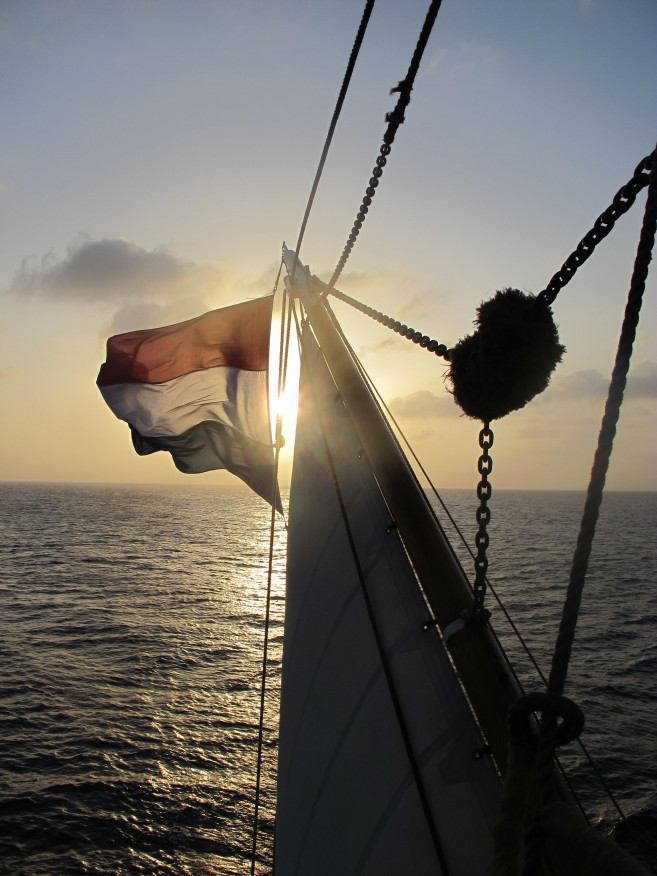 …. Barely on board I found myself in a harbour in say.. 1915, part of a chain of some fifteen crew handling a truckload of provisions down three stories into the ships belly. Most of the stuff was quickly thrown from man to man. The 50 lbs bags of flour though needed some extra muscle. Great! Life on board has started…..

….not being too keen on heights I was anxious to see whether I would dare to make it to the first yardarm. But once dressed up in a sturdy safety harness and under the reassuring guidance of Cri I soon found myself standing in the Swedish horse on the port Topgallant. I know I didn’t have to, but I enjoyed it more then anything.

…….Though I sailed often before and seen numerous dolphins, flying fish, seals and the occasional shark I never saw The Big Ones. So I got goosebumps when one afternoon a yell came from the foremast:”Whale to starboard!” I only saw its tail twice, but we could follow its blowing fountain for a considerable amount of time…..

….. this morning bosun sent me up with a leather bag of tools to fix the fastening of one of the staysails. He said he did not know precisely on which level the mending was to be done, but I would find out soon enough.

Up I went. And, unable to find what I was supposed to find I went up…and up…to the main royal.

No staysail above that level. So I yelled down at bosun: “I am sorry, can’t find the problem you told me to fix!”. His answer:” That’s right, you should be in the foremast!”……….

…….There is a first time for everything; today was the first time in my medical career that I attended to a patient dressed in a climbing harness…………

……..so here we are. I am still impressed by the craftmanship of our captain as she manoeuvred the ship into the confines of a 20 knots windswept small harbour to a mooring at a downwind jetty in Sal.

Back to normal life. But so much richer……

Wow, what an adventure of sights and sounds you're having! Good for you on braving the heights in the rigging. *applause.* Say hello to Dharam Kaur from us in San Francisco. Safe travels to you all southward. :)