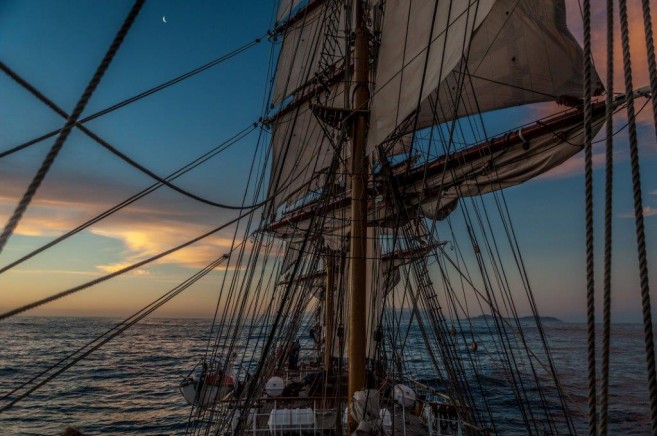 South Africa welcomes us with calm winds and sunny weather.

The good breeze that has been helping our progress until now, started to fade away during the night, but died almost completely in the early morning.

At breakfast time just 5kn of WSW light air blows as our speed drops to a drifting velocity of 2kn.

We didn’t wait for much longer before clueing up the Courses, brace sharp on Starboard tack and turn the engines on. The forecast still tells about several more windless hours, and being so close to South Africa better keep going despite bering under engine. Like this they roar after about ten days of rest while the sails and the wind were busy bringing us here.

Having a look at the wheelhouse GPS we can see that lands lays at about 65nm away. The presence of a busy port closeby can be also guessed by the increasing amount of ships around us. We are getting straight into rather hectic shipping lines as we get close to Cape Town. The waters gradually are getting shallower as we sail pass the Continental Slope and get into the more evenly levelled shelf. Being relatively more accessible than other oceanic areas, the Continental Shelf is the most studied and commercially exploited area of the sea. Fisheries, mining and oil extraction takes place on that parts of the ocean.

About morning coffee time some loud voices come from the Fore Deck… Land at sight! Cape of Good Hope lays 50nm ahead of us, but already visible under the few low clouds that hang over the horizon. The very same land that was spotted in 1497 by the explorer Vasco da Gama small fleet. Before that there was a long list of Portuguese sailors who ventured south of Gibraltar into the African coast, step by step reaching those higher latitudes.

Gonzalo Cabral in 1432 sailed to the south of Cape Bojador. This achievement was followed by Eannes in 1433, Baldaya in 1435 and da Cadamosto discovering the Cape Verde Islands in 1456 and reaching Gambia afterwards. The ocean road towards the southern parts of Africa started to be open. Later on Diego Gomez did a trip as afar as Cape Palmas located at the West entrance of the Gulf of Guinea. This was the southernmost point reached for a few years, until 1486 when the explorer Diogo Cao went further south than anyone before, reaching Cape Cross in Namibia.

The next expedition took place just a couple of years later under the command of Bartolomeu Diaz, with the mission to round the continent and sail north. After being blown out by a resilient severe storm, a great cape came into view beyond the explored areas in South Africa. Due to the difficulties they had to reach the area and the storm that hid the view for days, Diaz named it Stormy Cape.

However, being not such an appealing name and intending to start a trade route around the cape into the Indian Ocean, King John from Portugal re-named it as Cape Good Hope. Its discovery opened the possibility of finding the long sought sea route to the East around the African continent.

The man who was commanded with this voyage of discovery into the Indian Ocean was Vasco da Gamma (1469?-1524). Da Gamma sailed from Lisbon on 8 July 1497, in charge of three small expedition ships supported by a supply vessel. As far as Cape Verde Islands they steered southwest. But soon afterward, Da Gamma made a sweep out into the Atlantic, away from the African coast, perhaps trying to avoid the calms and adverse currents Dias had encountered in the Gulf of Guinea. The fleet succeeded on rounding Cape of Good Hope and Cape Agulhas on November, and sailed up the East African coast. They arrived to Calicut, India on 20 May 1498. It was a voyage filled with dangers and difficulties, topped with a terrible voyage back home. The route he sailed on both ways, was the longest ocean voyage ever made by then, but nevertheless represented a great feat, opening a direct sea route to the rich countries of the East.

Vasco da Gama didn’t stay long in Calicut, just took the time to fill up the ship’s holds with spices and soon he set sail for home. Ignoring the local weather, the fleet took a total of 132 days to cross the Indian Ocean Westbound, while on their way to Calicut it just took 23 journeys. Their next landfall, in the Kenyan coast, saw his ships and men in a deplorable state. Half of the crew had perished during the trip, while the rest had trouble with scurvy. One of the ships was abandoned and the crew managed to sail home on the other two. But da Gama lost his brother during the homebound trip and stayed behind, burying him in Azores, eventually taking passage on another vessel and safely returning to Lisbon. Despite the huge cost of the expedition, on equipment and human lives, it ended up being economically a great success, bringing a cargo back worth several times the total cost of the enterprise, and a new era of Portuguese colonialism in Africa could begin.

Under engine and in sunny, calm and warm weather, as difference with those old times, we spend the morning and part of the afternoon getting closer to Cape of Good Hope to have a good look at it. Sunset met us when we were just a handful of miles off the cape, then slowly we make our way northwards following the South African coast towards Cape Town.

Engines are turned off and once we brace square, Europa calmly sails at about 3kn under SE-ly light breeze, the 35nm left until arrival to our anchorage run front of the city. There we plan to spend all day, wrapping up the trip and getting all ready for going alongside the day after. Taking advantage of the good weather and calm conditions the crew keeps preparing the ship for the three weeks shipyard period to come, starting straight away once we leave the ship in a couple of days.

Being closer to land we experience a decrease of several degrees on the surface water temperature. From the 21ºC we had when sailing into the eddies of the Agulhas Current, today it just reached between 18º and 15º C. Along the

Western coast of South Africa now we are under the influence of the northwards flowing current of Benguela. This flow corresponds with the eastern portion of the South Atlantic Gyre. Along the coast it produces an upwelling of cold and nutrients rich waters that supports the high productive Benguela ecosystem. And as such, today we could see a great increase on the birdlife all around. Countless Black browed albatrosses are accompanied by flocks of Great shearwaters. Occasional Yellow nosed albatrosses also pass by. White Chinned petrels, Sooty shearwaters and another representative of the same genus (probably Manx shearwater) can also be spotted. Some beautiful Cape gannets pay us a short visit every now and then.