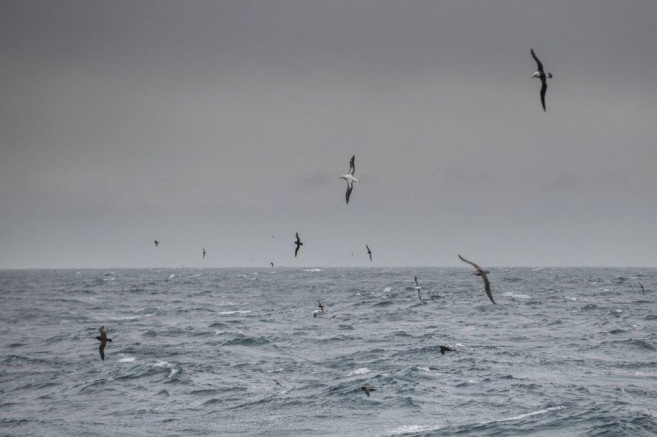 After waiting overnight slowly sailing under reduced canvas in lightE-ly breeze at about 60nm SW from South Georgia shores, before breakfastwind started finally to pick up gradually. First to 20-25kn veering toSE-ly, while we keep changing course on a more NW-ly direction.

In the early morning we find ourselves making way towards thenorthernmost tip of South Georgia, while countless of the birds thatmake their nesting areas out of the island’s coasts fly on our wake. Some of the mighty Wandering albatrosses show up escorted by the more
common Black brow. Numerous White chinned and Giant petrels join themwhile the small Wilson storm petrels flutter in excitement above theincreasing swell. During a couple of hours even a handful of thebeautiful Snow petrels pay us a short visit. Surrounding them, theever-present Prions keep showing their flying skills on their undulatinggliding around the Europa.

Rapidly increasing winds and growing seas catch up with us just beforebreakfast, when the gusts blow over 40 to 45kn. At the background of thebreaking swell, the rocky seashores of South Georgia topped by highmountain peaks seem to give us their rough weather welcome to its wildcoasts.

With no time to loose, the crew clue up and furl Upper Topsails, takeaway Inner Jib, strike Spanker and changed it for the smaller Trysail.Under reduced sail and slowing down, Europa waits for the strong blaststo pass over and for seas to decrease before heading to the exposedNorth tip of the island.

Holding on to our hats while working on deck, we brace squarer andfollowing the now gradually decreasing SE-ly winds, we can hoist againUpper Topsails, changing also the Storm Dekzwabber by the normal andlarger one, same operation conducted in the Mizzen Mast with theSpanker. Like this, Europa heads towards one of the gates to the NE coasts of South Georgia, the Steward Strait, while slowly adding somemore canvas when the breeze now eases to about 15kn, ending up with allSquares set. However the wind has been decreasing, the swell we areexperiencing makes the Europa rolls quite heavily while some big wavesunpredictably crash against our hull and wash over the Main deck. Later on, to better deal with the increasing seas and increase our speedtiming our arrival to the NE coast of the island, engines roar once moreafter their resting week when we have been just progressing under sail.Courses are clued up and furled together with Royals, Dekzwabber andSpanker, followed by the Top Gallants.

Over the next hours, the wild winds show up again, joining forces with ahigh and confused sea, with two big swells crossing paths rising fromthe South but also from the Northeast. That chaotic oceanic situationmakes the ship pitch and roll quite violently. On that circumstances thesort of a shortcut offered by the Steward Strait seems to be out of question. This channel lays between Proud and Bird Islands, bothbelonging to the little archipelago that crowns the North tip of SouthGeorgia. Despite not being excessively narrow, with its 1.9nm in width,however a number of shoals restrict the navigable part considerably.

That, together with its irregular rocky bottom causes tidal currents,eddies and noticeable swell, today increased by the tempestuous messyseas and ferocious wind gusts. Decision is rightly taken to add extramiles to our route but navigate more safely around all the islands thatbreak off North South Georgia mainland. The most offshore of them soon becoming visible with their jagged rocks where the swells break.

An impressive and exciting spectacle that sure was shared by CaptainCook in 1775 when sailing to the coordinates provided 100 years beforeby the English Merchant Antoine de la Roche, sighted land. The storytells that arriving at Roche’s coordinates, Cook found only foggyconditions… but luckily the skies cleared up next day revealing bigicebergs, that being found at this latitude of 54ºS suggested that alarge glaciated landmass was close. But curiously enough, the actualland was first sighted by Midshipman Willis, probably when he went outon deck to empty his bladder after one of his well-known drinkingnights… Anyhow, discovered by a drunk sailor or a renown Captain, thewind-swept island group was named after Willis. After that, soon moreland was at sight, showing high mountains cut by large and steepglaciers. Cook took the chance to land in several occasions, takingpossession of the lands for the King of England George III.

Following his steps, fighting against rough sea and wind conditions wemake our way around the islands, while striking sails and furling,engines pushing us helped by the Top sails on our rolling course.

Gradually we brace sharper and sharper accordingly to our course andwinds, while scattered growlers and a couple of big icebergs join thestrong blows and high and tempestuous seas on their welcome to SouthGeorgia.