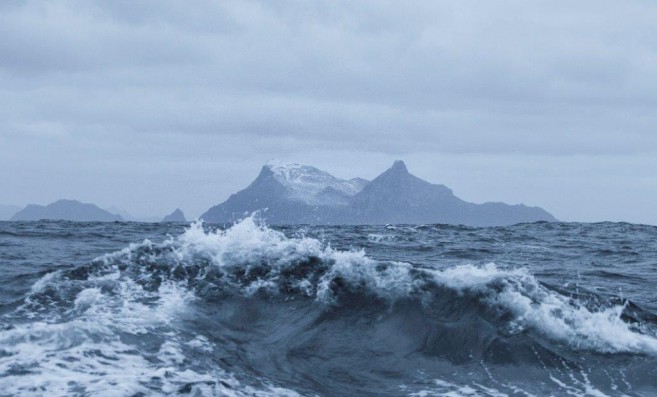 23rd November 2017  Approaching South Georgia we pass by Shag Rocks, having a fantastic sailing day, still rolling on the swell of the Southern Ocean. Arrival to Right Whale Bay during the night

With the first light of the new day we could see the impressive rocky cliffs of Shag Rocks in the horizon. We pass them sailing under fair SW-ly winds of about 25 to 30kn, as we still brave the big swell of the Southern Ocean.

Those spectacular rock formations appear to rise out of nowhere surrounded by the vast ocean, reaching heights of about 70m between Falklands and South Georgia. they represent the only sizeable outcrops on the large continental block on the North Scotia Ridge. They belong to the major arch of Islands named Scotia Arch, that extends on a sort of a bend from South America to the northern tip of the Antarctic Peninsula, passing by South Georgia, South Sandwich and South Shetland Islands.

Many seabirds nest on them, including Antarctic Shags that give their name to this rocky formations. The upwelling of deep rich waters that they produce as the sea bottom rises abruptly from the abyssal depths to the surface, also attract marine mammals. Actually the area is used by the breeding population of Southern Right whales of Peninsula Valdés, as their feeding grounds.

Soon we leave them behind under the attentive looks of a gorgeous Grey-headed albatross, racing the wild seas at about 9kn of speed towards our destination at South Georgia. Luckily we keep this good pace for almost the whole day, with will allow us to arrive to our first planned anchorage in South Georgia today during nighttime.

Dawn brought also a general improvement on the weather, and during the last journey of our crossing from Falklands, the sun often breaks through the cloud cover, thus allowing the crew to continue with some maintenance jobs up the rigging and later on starting to put the zodiacs together. They had been stowed away to allow more space for sailhandling on deck as from the beginning we were anticipating quite a rough crossing.

While doing so, somebody shouted “Land at sight!”, Willis Islands, the small archipelago on the NW corner of South Georgia, appears on the horizon amongst the low clouds.

The heavy healing to Portside plus the rolling on the big swell continued for almost the whole day, sailing under winds that fluctuate between 20 to gusts of 30kn, and start slowly veering, becoming more SW-ly. We keep up with our good speed of about 8 to 9kn setting the Royals and the Outer Jib as well. Like this we have made 198nm during the last 24h, and at lunchtime we have just 68nm to arrive and drop anchor at some point during the night. We head towards Right Whale Bay, close to the Northwest corner of South Georgia. There we expect to be relatively protected from the forecasted W-ly and NW-ly winds, ups to 20 or 25kn. As a matter of fact, those winds reached us in the evening, when we brace accordingly to sail almost downwind or our E-ly course, and take some of the Lower Staysails away. At that point, and still riding the big swell, Europa rolls heavily from Port to Starboard for a while, until after dinner, when the seas seem to ease a bit.

From then on, the heavy healing and rolling from the last few days became more bearable. The decks that had been awash during the last days gradually start to become dryer, and we can open again the watertight doors. Like this we can access the fore and main decks without having the risk of an unwanted cold bath on the frigid waters covering and splashing the decks.

During the night again we can start walking around the ship without having to think on every single movement we do. We have learned and come to appreciate simple things like walking around without bumping ourselves on every wall and corner,  or filling up a cup of coffee without having to become a juggler. Now we understand why sailors always hold on to their drinks, easy to recognise them even ashore, having a beer in the bar.

Voyage Crew sea-watches kept going on until dropping anchor. It was passed midnight when we approached our spot at Right Whale Bay. Last part of our route was done at a bit slower pace and on veering to the W winds. Getting closer to the point where we plan to stay overnight, we start taking sails away after several sail handling manoeuvres, and we go all the way under sail to drop the anchor. Once there, the night wasn’t over yet, as all canvas needed to be stowed away. While furling and preparing all for the night at anchor, partially cloudy skies during the dark hours let get a glimpse of the high mountains enclosing the bay. A perfect frame for the incessant Fur seal howling and Elephant seals roaring that surround us. Tired but with a smile on our faces, we go to sleep, dreaming on stretching our legs ashore tomorrow, when we plan to start our visits to the beautiful and awe-inspiring South Georgia Island.