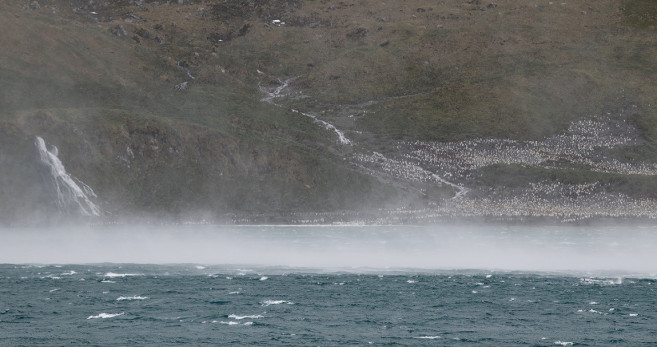 Blown out of Right Whale Bay by the morning strong gusty winds. Good anchorage and zodiac cruise at Rosita Harbour.

English despite his name, Antoine de la Roche, has seen land here in a storm exactly one hundred years before in 1675. Arriving at la Roche’s coordinates he had taken, Cook found only fog. It cleared next day to reveal an iceberg, which in the mild latitude of 54ºS suggested high and cold land was closeby. It was first seen by Midshipman Willis, who was known for his heavy drinking, and possibly only on deck to relieve his bladder. The off lying island he saw is named for him and soon there was more, a long run of coast, with high icy mountains towering into the clouds, separated by steep glaciers. Cook wrote: ‘Not a tree or shrub was to be seen, not even enough to make a toothpick. I landed in three different places and took possession of the country in his Majesty’s name under a discharge of small arms.’

We had to wait until this morning for South Georgia to reveal its rough beauty, that remained hidden behind yesterday’s thick low clouds. We had rain, fog, swell, cold, and yet another of the island’s characteristics welcomed us today at Right Whale Bay: fierce gusts up to 45kn rush over the agitated seas, rising spray from its surface. At the background, majestic mountainous landscape, crowned by glaciers and snowfields descends and breaks off toward the sea in cliffs, waterfalls, bays, swell battered beaches and rocky capes. A scene worth to enjoy from the ship’s decks, but not to even try launching a zodiac for a landfall. Fur seals occupy all the shores around us, mingled with countless King Penguins. Many of them seem to entertain themselves jumping, swimming and plunging the rough waters and tempestuous conditions. At our bow, the panorama is completed by a long beach at the foot of a low laying valley, framed by cliffs nesting a large King penguin colony that climbs up the tussock grass slopes.

A dramatic and spectacular welcome to the untamed island of South Georgia. Soon Europa turns around, and now, going with the wind she helps herself with the Fore Lower Topsail on her quest for a more sheltered place further along the coast.
A couple of hours after she turns her bow into Rosita Harbour, a well known location for the ship that often enjoys here a relatively good anchorage. In the bay, both wind and seas ease down offering the chance for an activity off the ship for the afternoon. Though there were plans for a landfall and a hike, soon we discover that all the extent of the beach is crowded by Antarctic Fur seals. Aggressive males hold their space desperately, where harems of females lay. Solitary big males guard the shoreline expectant for more females to come ashore. They all want to enlarge their harems, they all want to mate. Arriving to the island first, they fought for territories not so long ago, then the females return from the seas, still pregnant from last season and soon after they give birth. About ten days later they become receptive again, moment that the males have been eagerly waiting for. Soon they will mate with them, and afterwards they will swim to Antarctica. The mothers stay behind taking care of their pups for 3 to 4 months.

Large number of individuals engaged on bloody fights, territoriality, hormones working their magic, powerful brawls, mating, newborn pups. All in an astonishing display along the beach, which we could enjoy from our rubber boats. No space left at the coast today for us to venture ashore, but a great experience to observe and try to have a glimpse of the fur seal society from the water as we drift along.