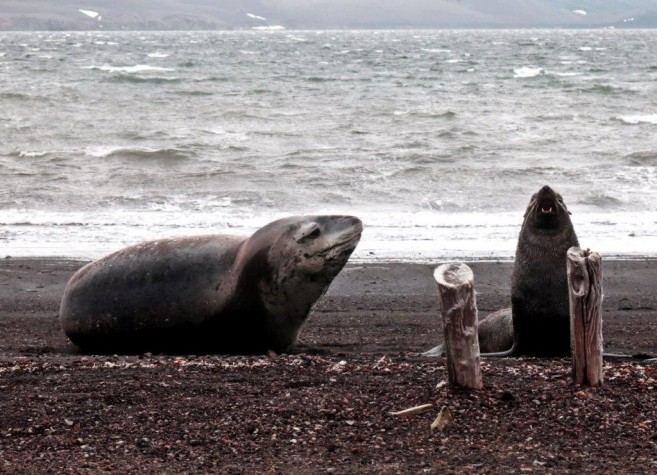 Leaving Yankee Harbour after midnight, soon we found ourselves facing strong winds on our way to Deception Island. Although the forecast was more benevolent, cold air shooting down Livingston Island glaciers made us struggle with variable hard conditions, with gusts on our nose reaching 60kn. Nevertheless we managed to overcome these difficulties
and reach Neptune’s Bellows by breakfast time. This gap in Deception Island’s caldera is the gateway to its inner bay, called Port Foster. While the wind blows over 25kn, and despite the cloudy and cold weather, many of us were on deck to enjoy and photograph our passage through this narrow channel.
It is not easy to navigate this passage in good weather, and under this morning’s circumstances, it takes nerve and skills to sail through it. As we pass by, we leave a steep lava cliff at our starboard side and the submerged Ravn’s Rock at our port side. Whalers Bay, the landing site for this morning it just around the corner, soon becoming visible with the remains of the Norwegian “Hector” Whaling station in sight. Not just the early 20th Century whalers used the constructions, but it also has been through other uses afterwards. It became a Navy-military base during the English “Tabarin” Operation in the Second World War, and then was part of research facilities belonging to the British Antarctic Survey, formerly called Falkland Islands Dependencies.

Due to the still strong onshore winds and instable weather it took a while to make the final decision of offering a long hike to Baily Head, located at the outer shores of the island, besides having another group to explore the decaying ruins of the whaling station. First ones to go ashore were the people interested in the long walk, followed by the rest. Short waves breaking along the shallow beach made the landfall quite adventurous and wet for all of us.
The path to Baily Head climbs steep up the volcanic slopes to approximately 300m in altitude, on the way passing a couple of outstanding viewpoints over the inner side of the caldera and the outer waters of the Bransfield Strait. Getting higher on our walk, the wind increased to the point of almost lifting us up from our feet at arrival to the highest point. Enduring the hurricane-like gusts we make our way through the desolate landscape until starting the descend to Baily Head, as it reveals itself in the distance as a prominent headland of Deception. Walking over volcanic gravel ground, snowfields and easy glaciated terrain, in about an hour and a half we reach our goal. There, its outstanding scenery unfolds to our eyes. Vegetated steep cliffs and green slopes create a sort of amphitheater that drains the meltwater of
the glaciers all around along a large bowl-shaped valley of hummocky topography. As far as we can see, countless groups of Chinstrap penguins stand. Ubiquitous molting adults and hungry chicks garnish the landscape, even occupying the higher ridges, making us wonder why and how they can make their way so high up the hills. Despite the declining
numbers of the Chinstrap rookeries in South Shetland Islands and the Northern shores of Antarctic Peninsula, Baily Head is still home for an estimated number of 70.000. We need some time to accustom our eyes to the big picture this place offers. Observing this nature’s bounty, more and more details pop up here and there while an unbelievable number of chinstrap groups surround us everywhere, from the beach under our feet to the very top of the hills around us. The overcast weather at the start of our walk, gradually improved during the morning hours, allowing for great views and glimpses of blue skies. In those conditions we start our way back, hoping for some time left at our arrival to Whaler’s Bay to explore a bit the remains of the old whaling station.
There the scenery is great though completely different from what we saw before. The blustery weather in the early morning definitely let the blue skies to show up over the wide-open spaces along the shoreline. The whaler’s facilities, counting with houses, water-boats, high-pressure blubber boilers and oil tanks amongst others, lay framed by Neptune’s Bellows cliffs on one side, and a loose scree ridge over Kroner Lake at the other. Here, between the years 1906 and 1931 countless whales were processed to render the highly appreciated oil from their blubber. All the original
structures have been partially covered and melted by a mud-ash flow in 1969, but the devastating event left enough constructions standing, nowadays considered an Antarctic Historical Site, sort of open air museum, in clear decay.

In comparison with the other places we have visited during the last couple of days, Whaler’s Bay looks quite desolated, showing a different beauty than what we experienced until now. Now and then solitary Gentoo penguin stop for a while to take a breath and enjoy the solitary beach, a few Skuas fly around, some Fur seals snooze on the gravel coastline. And there, at the foot of Neptune’s window a beautiful Leopard seal rests. This narrow gap on the rocky ridge over Neptune’s Bellows, was named by Lt. Penfold, from the British Royal Navy, following his survey of Deception Island in 1948-49, because weather and ice conditions in the approach to Neptune’s Bellows could conveniently be observed from this saddle. The story tells that it was from here that the young sealer Nathaniel Palmer in 1820 spotted unknown lands to the SW. He could claim to be the first one that spotted the Antarctic Peninsula, a statement later refuted as the continent had been sighted months earlier by Thaddeus von Bellingshausen, a scientist and explorer sailing for the Russian Czar. We leave behind the ghostly Whaler’s Bay to board Europa and start the short way to Pendulum Cove, a favorite spot for an “Antarctic swim”. Deception Island still counts as an active volcanic caldera even though it last erupted about 50 years ago. This fact can be noticed along the shores that steam on low tide, and Pendulum Cove is one of the areas where the thermal activity is high.
As a reminder of the earth power, showing as volcanic explosions, here lay the remains of the Chilean Base Pedro Aguirre Cerda, destroyed by the year 1967 eruptions. Despite the spectacular event and the destruction caused on the Base facilities, the personnel were evacuated from here successfully. What is left from the buildings is bent and
curved, sticking out of the ground in the barren black landscape.
When we set foot ashore, many were eager to strip their foul weather gear to the swimming suits, and try the hot water along the shores of the beach. Soon they lay flat in the shallow ponds just at the tideline.  From the really hot water there, some are brave enough to run into the freezing cold seawater before claiming back their warm spots.
Pendulum Cove gave us the unique opportunity to experience Antarctic warm-springs and have a couple of hours of great fun, before returning on board for diner. Then Europa heaves anchor and starts motoring the 65nm Southbound across the Bransfield Strait towards tomorrow’s destination. In the evening, our Russian photography-guide Valerii
showed us his work conducted in 2014, done on a similar trip that the one we are on. Still with the last light of the day we sail off Deception Island and facing the open waters we start feeling the oceanic swell. Like this we say goodbye to the South Shetland Islands and make our way to the Antarctic Peninsula shores.