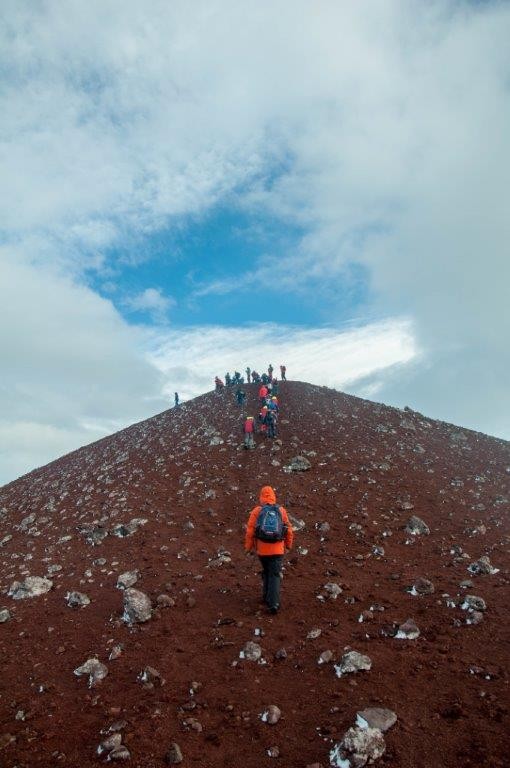 Under two anchors Europa pulled through last night’s strong winds and big seas. But slowly they ease down and by the morning blue skies take a peek through the clouds and swell seems to have been decreasing. Probably enough to have a look and maybe go ashore at the landing beach on the Eastern shores of Penguin Island. From the anchorage we make our way there by the start of breakfast. On deck, a tired visitor joined us this morning, for second time since March 2015, a Cattle egret landed on the ship. To see these species so far south is a rare sight, as they usually live in the lowlands from South and Central America, some individuals visiting Patagonia and Falklands in winter and sporadically South Georgia as well. There even have been some sights in South Shetlands and South Orkneys, and they have been spotted once as far as 65ºS in the Western Antarctic Peninsula. Probably small groups or individuals blown off their migratory course by strong winds and storms. Originally from Africa, they reached the New World in the 19th Century, and they are recent visitors in their southernmost range in Patagonia and Southern South America, with the first records dating from 1975.

But besides carrying a new passenger, the rest were ready to go ashore as soon as a scout zodiac was sent to the beach and checked that the conditions were acceptable for a landfall.

Penguin Island, as we soon realize just looking at our surroundings, is of volcanic origin, and its formation is related with other places visited during our trip, like Deception Island or the mainly basaltic Livingston Island.

Located at the Southern shores of the large King George Island, the almost circular Penguin is just 1.6kn in diameter. As many other places in the area its discovery dates from the early sealing times in 1820, when a British Expedition under the command of Edward Bransfield visited and named it after seeing many penguins occupying its shores.

Its summit is the 170m high Deacon Peak, crowned by an alluring crater nested inside a larger one. But before climbing all the way to the top, we all spent some time at the island’s Northeast side where we visit a lower crater filled by a freshwater lake, that hides its beauty until the panorama discloses when reaching its rim. As a background, the glacier fronts from King George Island shine in the morning light. For the ones eager to hike further, the highest point of the island tempts us up. Up the top we follow its round crater rim, walking on top of the precipitous rusty colored cliffs of its Southern side. Down below lays the so called Katsui Strait, the narrow channel between Penguin and King George Islands. Further back, the massive glaciers of the later catch the sunlight peering through the cloudy skies.

On the way back, we follow the same path until diverting towards a Chinstrap penguin colony close to shore. There, the non-hiking group had spent the duration of our landfall, enjoying one of the last chances to see this penguin species during this trip. Next and probably last opportunity for more Chinstraps will be at the merciless and desolate coasts of Elephant Island.

Soon we make our way back to the landingspot along the rocky beach, crowded with big male Fur seals, that looking at us or growling showing their disapproval to our presence, easily let us continue our way. Between them a leucistic individual stands up, easy to spot due to his yellow fur. They quite rare to see as there are not so many around. Laying at the beach amongst them, numerous whale and seal bones remain as witness of the large-scale hunting activities conducted in the area from the mid 19th Century to the beginning of the 20th.

Zodiacs wait for us a bit further along the coast, and soon we deal again with a difficult and wet embarkation over the round boulders at the beach where the swell breaks.

Lunch is ready on board, and just afterwards Europa heaves anchor performing the maneuver under sail. To get off the hook on that elegant way requires  good coordination between the three watches distributed on our masts, and good ears to follow the Captain’s commands and sequence of sailhandling. All started setting Fore Lower Topsail and Outer Jib aback to turn around, followed by bracing and gradually set the rest of canvas. All Squares are clued down and Lower Staysails hoisted, on Broad Reach. The wind becomes lighter and variable later on, as we find ourselves under the shelter of King George Island. Like this, before reaching Cape Melville (its characteristic northeast point, and access to the open waters of the Drake Passage), engine is turned on and off and Staysails and Fore Course come down and are set again a couple of times. Right during diner wind shifted from W-ly to S-ly, but it was not until after 20:00h when we got more reliable S and SE-ly winds to brace sharper on Starboard tack and stop engine, this time for good, wishing not to use it again for the 123nm to sail until arrival to the legendary Elephant Island.

Wow - that was a very detailed account of your hike on Penguin Island.Amazing! I could almost feel the freezing temps - especially as we are covered in snow with bitter winds at the moment in England. i was wondering how my Pilates tutor - Lucy - from Codsall, Staffs in England was gettiung on? Best Wishes to you all Pat X