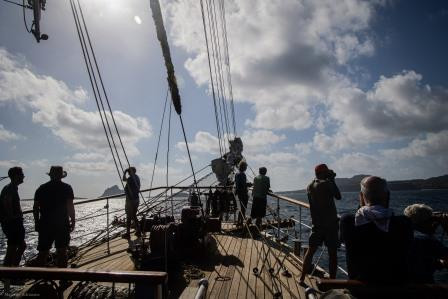 We have crossed the equator.
We satisfied Neptune with our sacrifices and I can now enjoy even shorter showers with less hair to wash or brush.
To even please Neptune more, self-written songs and acts have been performed.
Our efforts have been received well and rewarded with good wind.

Our first day in the Southern Hemisphere was celebrated with a visit to the islands of Fernando de Noronha.
I woke up extra early to get a first glimpse of the islands, and the shape we encountered on the horizon was unexpected.
It can be described as beautiful, but I think weird, Jurassic Park-like or the movie set of Indiana Jones would more accurately describe the scene.

Next to the island we dropped anchor for a swimming stop. For a few hours the windy rough ocean was forgotten and we had a glimpse of a normal holiday.
Nothing to worry about; no towels flying away, no sails to attend to. Just swimming, sunbathing and some snacks.
Except that nothing about this ship is normal.

We attract a lot of curiosity in the form of little boats, kite-surfers and a zodiac completely stuffed with officers, just in case they could not check on us with only two.
All was good and in the late afternoon we set sail again, on to new adventures.
Without our bird friends, who probably found a new home at the island.
No more photos of these beautiful birds, but also less deck washing to do.

Next to being proficient relaxers, we also got a long way on the sailing part; we know the names of all the sails and can find most of the lines.
Many are also proficient climbers and when you look up high in the mast, it’s not only experienced crew you’d see there.
The main reason we can now find almost all the lines is thanks to the famous pinrail-chace.

During this race, the team knowing most lines could win eternal glory.
There are apparently many competitive spirits on board, as you could find people studying all the pins (and the lines that are made fast on them) days, nights and hours and even minutes before the race.
This competitive spirit is also used for the extensive games of chess being played on board.
When asking people how their day was, it can happen that the answer would be “Very good, I beat [insert name here] today”.
But back to the pinrail-chase; because group spirit is an essential part

of being a sailor, one extra point was awarded to all the teams that dressed in their team colour for the occasion.
This was also the only point the team of new crew members managed to finish with.
I would like to tell you in my defence, as this was my team, that the judge at the start of the game already announced that he was not going to be fair.

Third team probably agrees with this, as they came in after us.
But I must say it was all very exciting with every team (ok, maybe except mine) taking the lead alternately.
It was not clear who would take the win until the last thrilling assignment.
Of which I will not give more away, so that no reader will have an advantage in future games.

Another reason for us starting to feel like we are almost worthy sailors is that we have days where we can practice a lot.
As in: we hoist a sail, to bring it down an hour later, to then shortly after hoist it again.
And this is not because the captain or mate are trying to annoy us or keep us busy, it has more something to do with the wind not making up its mind in what it wants to do.

Luckily it occasionally also behaves exactly as we would like to.
These are moments we can bring out the gorgeous stunsails.
They do not only look beautiful on pictures; it is also quite something to behold in real life.

Not too long ago I helped with the furling of some jibs at the bow in the night.
There were some lights on, to help us work.
This lit up the sails behind us, including the stunsails.
It was a magical sight I will not forget any time soon.

We have been gone a month and I keep rediscovering the ship; as the wind changes, so do the sails and their angles and as the sky changes, so do all colours on board. No day is the same.