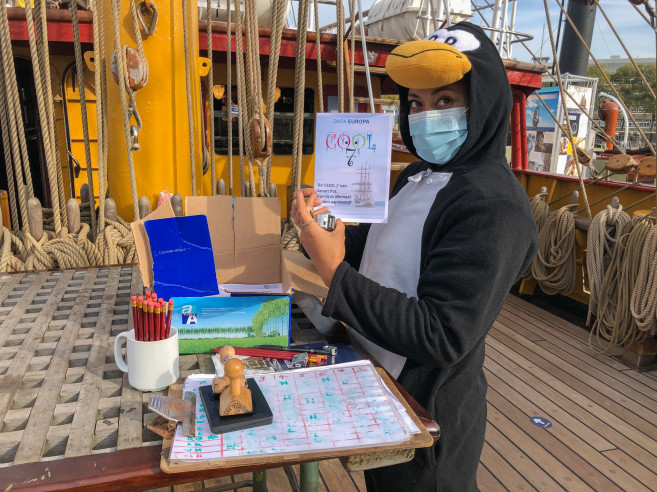 Het Scheepvaartmuseum towers over our heads at the end of the jetty where we are moored. All our activities on board, including maintenance projects and open ship to the public, run under its distinguished watch.

The imposing building hold a series of worldwide important naval collections, but it is also an historically important edifice on itself. Built over 360 years ago, was used first as an arsenal where the war fleet would store its cannons, flags and sailing equipment as a sort of the storehouse. Napoleon rebuilt the arsenal after it was gutted by fire in 1791, and it remained as a navy warehouse until the early 1970s. It was then when its purpose started changing and the best pieces and collected historical art and artefacts from a former Maritime Museum, were started to be stored there. With that, at the end the whole collection moved to what is today the National Maritime museum, which was officially opened to the public by Princess Beatrix on 13th April 1973.

In such illustrious location, ship and crew are spending the next few weeks, and with the EUROPA being launched in 1911, it represents a perfect match for the Museum. Next to us, the larger and modern Clipper Stad Amsterdam lays also moored and can be visited as well by the public.

Opening the ship to receive people interested on walking along her decks doesn’t stop the crew to continue with many of the jobs and maintenance under way. Below decks, painting and preparing storage areas is advancing at a good rate, aloft every day there’s something to be done. In a way, having part of the crew up the masts and yards busy taking sails down and bending others on, or sanding and vanishing on deck while an improvised sail making corner is set on the pier, makes the whole visit to the ship even more interesting. Welcoming families and visitors on deck is the task for some of us, a job that rotates amongst the ships complement. Even a new sort of penguin could be seen walking around. The most daring crew member disguised as such, made a joyful experience for the numerous kids around, introducing them to our Antarctic trips and its wildlife.

But not all and always is work, the crew also enjoys their time off in different ways. Being as we are in Amsterdam, the city known as the Venetia of the North (amongst many other adjectives for this urban area), offers great chances for sightseeing while navigating with our sloop through its maze of canals crisscrossed by uncountable bridges. The golden age of culture and trade of valuable exotic products in the early 17th century, provided for building this unique network of canals, based on a previous setup from the 14th century. Nowadays outer and more modern channels trace a semicircle around the old medieval city centre, with its narrower, more intricate net of canals and idiosyncratic dutch architecture.