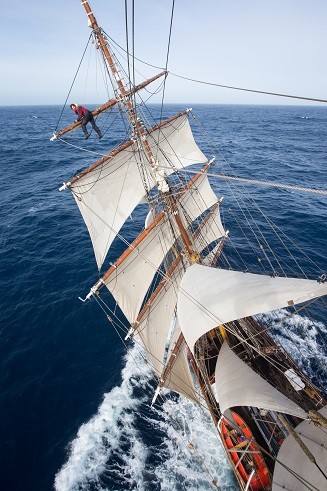 Clear skies and sunshine make their way through the partially cloudy conditions in the early morning. As the weather improves, the strong wind starts to decrease and become steadier between 15 to 20 knots. After the morning coffee time, as we roll under those lighter winds, Gallants, Inner and Outer Jibs, Middle Staysails and Spanker, also echanging the Aap for the larger Desmond. We sail over 6 knots on a 160º course towards South Shetland Islands. Now we sail with all our canvas set but the Gaff Top sail, Upper Staysails and Royals. But those ones are set before lunch as well.

The Europa looks gorgeous with all this canvas set dealing gracefully dealing with the lighter wind conditions and blue skies of today and rolling over 6 m swells. Under this milder conditions voyage crew start their watches at the helm as well, after training from Captain and Mate, supervised as well by the permanent crew at the beginning. In the afternoon the wind is veering to the N-NE, blowing 12 to 15 knots. Ruud decides to gybe to Port tack sailing Broad reach, and take the Storm Fore Top Mast Staysail down, together with Desmond, Dekzwabber and both Courses, as we start sailing more downwind and those sails start flapping.

During the day, as we check the surface water temperature we can see how it has dropped quite dramatically from around 6º C to less than 2º C in the course of a few hours. Clear indication that we crossed the Antarctic Convergence Area, and from now on we sail in Antarctic waters. As we sail rolling heavily from side to side in light Northerly winds, we are sailing across the biological Antarctic boundary, that separate the temperate Sub-Antarctic waters from the cold Antarctic ones. During our daily after dinner meeting Harko goes through the meteorological situation that we are experiencing today; from being battered during last couple of days by strong winds, gusts up to 63 knots and swell up to 8 mts, today as the day goes by, the wind had dropped considerably, veering from W to N-NE as well. We are in between two Low Pressure systems that use the “Drake Passage highway for Low Pressure systems”, and that gives us a break on the strong winds.

Our Captain also informed us about our progress, 150 nm sailed during the last 24 hours, from noon to noon. And just 156 nm to arrive to the South Shetland Islands. We are getting closer to Antarctica, and taking advantage of the better conditions on board while riding those lighter winds and decreasing swell, Jordi prefer to start straight away with the mandatory briefings that need to be done before arriving and starting any activity ashore. After a short coffee break, and with the permanent crew taking over the duties on deck, we start with the IAATO (International Association of Antarctica Tour Operators) lecture. Bark Europa, as the other companies and ships operating with private sector tourism in this area, belongs to such membership organisation. During the talk we learn the terms and conditions, which would let us set foot on Antarctica, the proper ways of behaving around the wildlife as well as the appropriate way to have a safe and great experience in Antarctica, the last and largest wilderness area on earth. The code of conduct and rules are pretty much straightforward but it’s always good to make sure everyone is on the same page and had been briefed on how to manage our activities in Antarctica. As part of the Biosecurity procedures to avoid bringing any alien species to the Antarctic system, throughout the day we vacuumed our gear in the deckhouse.

During the night hours and early morning, the weather deteriorates a bit, becoming overcast and rainy. This time, after a few hours sailing on Port tack, Harko decides to gybe to Starboard tack, furling the Main Course and the Storm Fore Top Mast Staysail, and taking away the Spanker, while setting the Fore Course. The wildlife that we can see from the ship also changed a bit today, together with the weather and the water temperature. Now, sailing in Antarctic waters, large flocks of Antarctic prions fly around us, and still some Black browed albatrosses glide passing by accompanied by several Giant petrels and the smaller birds that nest in Antarctica, the Wilson Storm petrels. During the afternoon a curious Antarctic Minke whale join us for about an hour on our way south. Minkes are one of the smallest whales, being also the most common ones in the world, if we think on the three species of them distributed worldwide, the Antarctic and Dwarf in the Southern Hemisphere, while in the North we have the so called just Minke whale.