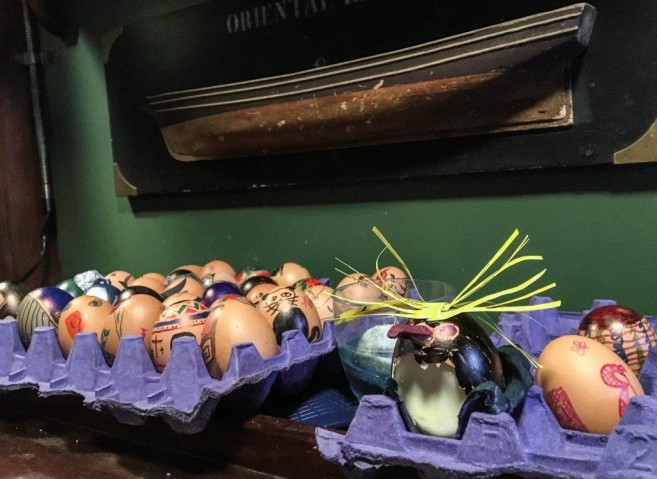 Full moon rising between the clouds welcome us to what will be a quiet night over calm seas. But soon the skies cover up and the light rain falls continuously since last midnight.

We all expect the forecasted wind change, from the light NE-ly 15kn to became NW and W-ly with strong force, announced to happen already hours ago, but still not materializing. The watches keep the lookouts running and the steering, for the rest is stand-by time, all ready for what is supposed to come. Seems like the weather of the Southern Ocean plays April fool’s day with us.

And so the wind changed at 05:00 Am, a passing low Pressure System suddenly brought 30kn of E-ly gusting winds. Both permanent crew watches were called on deck plus the voyage crew available, to strike canvas. From full sail we start taking away Upper and Middle Staysails, Outer Jib, Gaff Top sail, Royals, Top Gallants, and change Desmond for the smaller Aap over the Main deck. Everything had to be furled under the pouring rain. While packing the sails we realize that the Inner Jib has given away and ripped one of its seams. Once the blast has passed, the wind became more stable at about 20kn, as we keep steering Close-Hauled on Port Tack. Following it we end up heading to the SE, waiting for the Depression to overtake us.

As it we haven’t got enough rain, a front of thick clouds appears in the radar about to overtake us with even stronger rainfall. Usually those squalls or small frontal passages come associated with stronger winds. So, we are ready to lessen sail when suddenly, for this time, the wind stops almost completely. Still a light breeze blows from the north, and we keep the Europa almost adrift on a slow southbound motion. Watches are kept on stand-by to wear ship in case the wind comes back. Instead, during breakfast and after a while waiting to see what the variable conditions were up to, very slowly the wind seems to be slightly increasing and turning W-ly. No need for changing tack in that case.  Actually, slowly but steadily it starts backing to NW-ly and raise, we keep the same sail configuration and start slowly to turn towards an Eastwards direction.

It didn’t take much longer for the wind to became pretty wild and the for the seas to rapidly and spectacularly grow. Suddenly, from the flat calm we find ourselves facing a stormy situation once more. Steady blows over 35kn and gusts of 40 to 45kn made for the ship to start sailing on what we call “storm mode” again. Little canvas is set, but enough to pull us to speeds over 8 to 9kn, all ventilation from deck and watertight doors are closed. Under heavy rolling on the crazy seas, with swell getting higher above 6 to 8m and strong force winds, the steering is taken by Captain and Mate from the wheelhouse. Watches are kept on Standby and just lookouts are needed. Even reducing more canvas, Mizzen Top Staysail is taken away and furled.

Riding the untamed Southern Ocean, we spend a rolling afternoon. Indoors life is not easy, and every move have to be thought about before doing it. Cooking the meals is a whole adventure on its own, but the galley girls keep doing their fantastic job even on the worst conditions. Out on deck the waves slam against the hull with thundering noises, splashing water all around or even overpassing the ship’s rails and washing the lower decks continuously. Any sailhandling invariably ends up with freezing water running in our boots or dripping from our necks down our backs. Luckily the temperature had risen in comparison with the time we spent in higher latitudes. In fact, the surface water temperature in the evening is already over 5ºC, a quick increase of more that 2ºC n just a few hours, indicating that we are getting closer and close to the Convergence Zone, and about to leave behind the Antarctic system to enter in the Temperate area.

We haven’t got to touch a sail again until right before diner, when Dekzbabber is hoisted over Sloop deck. Conditions are pretty similar to the ones we had for the whole afternoon but on slightly decreasing seas. Nevertheless the decks keep being awash and the huge swell keeps pouring over the rails in each big roll of the ship.

It was not until late at night that the situation gets better, wind decreased to about 30kn and just from time to time big waves crash against the hull and sweep the main deck.

The rough seas and blustery conditions of the day didn’t stop us to have a little fun in celebration of those Eastern dates. Hard boiled eggs were displayed to be painted and garnish as we wish on the famous “Europa Boiled Egg painting Competition” and in the lounge Jesus Christ Superstar was broadcasted. Bad weather didn’t stop the repetition of the Kelp lecture either.

I am coming to Cape Town with Andrew and Sophie’s Mum to welcome you back and can’t wait to see the ships and hear the tales. I feel seasick just reading the comments!! It’s an amazing experience for you all, safe sailing Fiona French

Really enjoying reading these logbook updates. My dad is onboard his name is Bob Anderson would be great if you could tell him his son and grandkids say Hi and we are following his trip and we are all looking forward to him getting back, Thanks. Matt