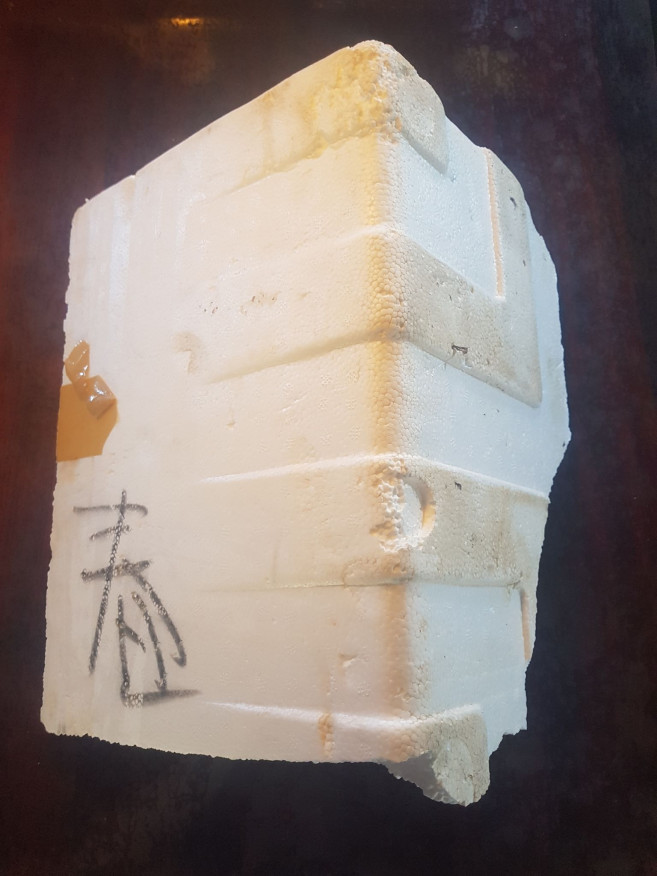 Meet Steve, Steve Styrofoam. He is 76, single and calls himself an ocean wanderer. Because wandering the oceans is what he has been doing for quite a while now. He was born and raised in Frankfurt, Germany. He started his life as packaging for one of the first microwaves on the market. Unfortunately this type of microwave did not sell very well and he spend years and years in storage. It was always dark, cold and he did not really have anyone to talk to. These microwaves just weren’t on his wavelength.  He thought to himself: “ If I ever get out of here I want to see the world”.

After about 20 years the storage got cleared out and all the microwaves and packaging were send to a big dumpster. That’s when Steve took his chance. He had to leave some bodyparts behind but managed to be picked up by the wind and travel to a river. On that river is where he learned he loved being in the water. The waves, the wind, meeting sealife and the ever changing views.

Even though Steve is 76, in plastic years he is still pretty young. But what does that mean, being young, when you will have an infinite life?

In plastics, life is more measured by size. When Steve arrived in the ocean he found out he didn’t belong to microplastics. But he also did not feel very macro. He decided he didn’t feel comfortable with either of the two terms and likes to be called non-measured. After being on the ocean by himself for some years he was looking for some company and went back on land. He washed ashore on the beaches of Thailand. He got collected by some local fishermen and worked as a fish container for a while.

Thailand is also where he got his tattoo on a drunken night. It is supposed to say “ Ocean wanderer” in Mandarin but he is not completely sure it actually does. Because after he got it people who saw him always put him with colleagues with exactly the same tattoo. He just doesn’t believe they are all ocean wanderers.

After a while he got sick of landlife again, when a windy storm passed he managed to get back to the ocean.

He almost immediately got stuck in the Pacific garbage patch for a while, those were  some crazy years. By the interference of some whales he was able to travel south. (That’s another very cool story but’s that’s just too long to tell now.) And South in the Pacific ocean, that’s where he met Fiona.

Fiona, one of the most beautiful fishing nets he had ever seen. She was also funny, brave and unlike anyone he had ever met. They could spend hours talking about their ocean adventures. But she also had a different side, very clingy and chaotic. He would feel sufficated when he would get all tangled up in here endless lines. Anyway, it turned out they just wanted different things from life and decided to split up after arriving to the Atlantic Ocean.

And that brings us to where he is today. Still a bit heartbroken over Fiona but also looking forward to new adventures. He is trying to get back to the North Sea, hoping to meet some of his family from Germany he has not spoken to in many years. He was looking for the right current to get there when he got picked up by the bark Europa. At first he thought he managed to catch a perfect ride back when he heard so many people speaking German around him but is seems they are heading South. Anyway, he noticed on some T-shirts it says ocean wanderer too, so this must be nice people. He is curious where the wind will take them and what adventures lie ahead…