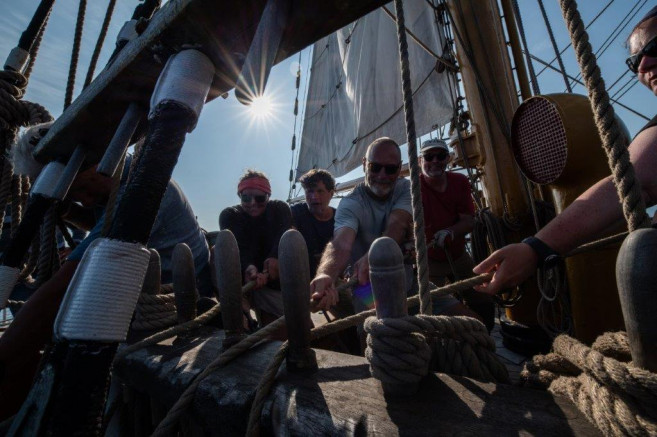 Sunshine, warm temperatures, calm seas and light breeze backing gradually from SSW-ly to SE-lywere the trademark of the day. Gently blowing from our back, Europa tries to keep some speed towards the North and Northeast with her square sails set and several changes now and then on her bracing and the setting of her staysails, until the afternoon when it was clear that the help of the engines was needed. Europa was drifting over flat seas just slightly rolling over low long swell. By then, Main and Fore Courses were taken away, braces were pulled square, the remaining staysails passed to Port tack and the rumble of the motors could be heard.

Until the first night watch some of the canvas was still spread to the light air trying to contribute to our progress, but soon it was decided to clew up all squares and drop all staysails, relying on the engine work, while Europa heads to the distant Norwegian coast in a NE-ly direction.

The day invited to spend time on deck lending a hand to the permanent crew with the ship’s maintenance or to bask under the sun until called to pull some ropes during the various occasions when it was needed. The weather and sea conditions were actually ideal for sailhandling explanations and gradually kept realising what, why and how to manage the intricate spider net of lines that keep the rigging working. In that way, the goal is that the different voyage crew watches acquire the knowledge to operate the ropes to set and strike sails, under just the supervision and keen eyes of the permanent crew.

Besides the sailing itself and the unfolding of its mysteries, this trip also offers the chance for joining some other educational talks and informal chats on different subjects. Today the topic versed around the effects of the Oceans on the global climate of the planet. The formation of dense and cold water masses in the Polar Areas, drive the thermohaline circulation at a worldwide scale in our oceans. Immense transfers of water mass and temperature happen all linked throughout the oceans of the globe and are one of the key pieces on the climate and its changes. Those changes have driven too the movements, migrations and colonisations of new lands by plants, wildlife and eventually the humankind itself.

"There isn’t any symbolism. The sea is the sea. The old man is an old man. The boy is a boy and the fish is a fish. The sharks are all sharks no better no worse. All the symbolism people say is shit. What goes beyond is what you see beyond when you know."

- Ernest Hemingway
The old man and the sea