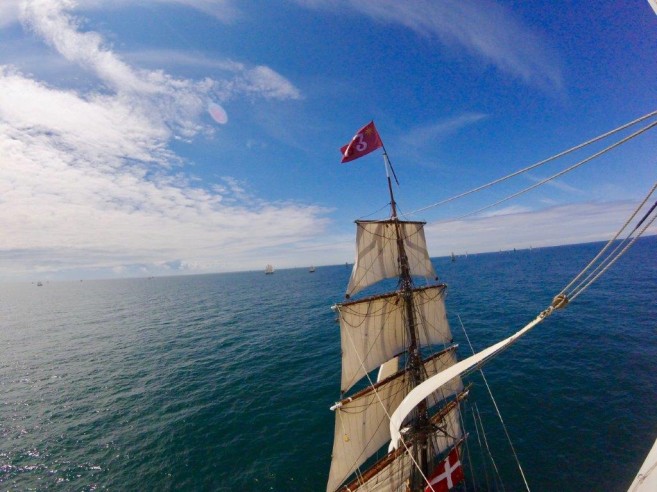 The tall ships arrived in Aalborg by 4th July and the race events of 2019 began with the opening ceremony and the Crew Parade, followed by crew activities such as basketball and football. Then all the crews from all the ships made their way to the Crew Party where there were live bands, DJs, free food and free drinks – what more could a sailor ashore wish for?

The new voyage crew joined this afternoon; between their arrival and dinner, introductions, familiarisations and training took place in between coffee and cake. That evening, we were all treated to an outstanding firework display that lasted 20 minutes - an impressive variety of rockets and colours adorned the midnight-blue sky and looked particularly magical behind the silhouettes of the tall ships’ riggings. A brilliant grand finale from events in Aalborg!

This morning we prepared the ship for departure amongst more training and mast climb familiarisations. By 12:30 we had left the berth and in the usual EUROPA style, we had all sails set within 10 minutes of leaving the mooring. By the time we’d come out of the meandering fjord the voyage crew were competent rope-handlers, having braced too many times to count as we rounded each corner – we’re getting that race practice in early! The other tall ships followed behind and it wasn’t long before we were out in the open sea once more. The weather has been unpredictable with irregular showers and then bursts of sunshine throughout the day, but the wind has been great and we’ve got a great heel on. The under-25s have been helping out with the daily maintenance and cleaning of the ship, plus doing some extra seamanship activities as part of their sail training tall ships race experience. The waning crescent of the moon shone creamy-white this evening, becoming a mellow orange as dusk steeped into twilight, with the gentle rolling of the Baltic swells helping us on our way.