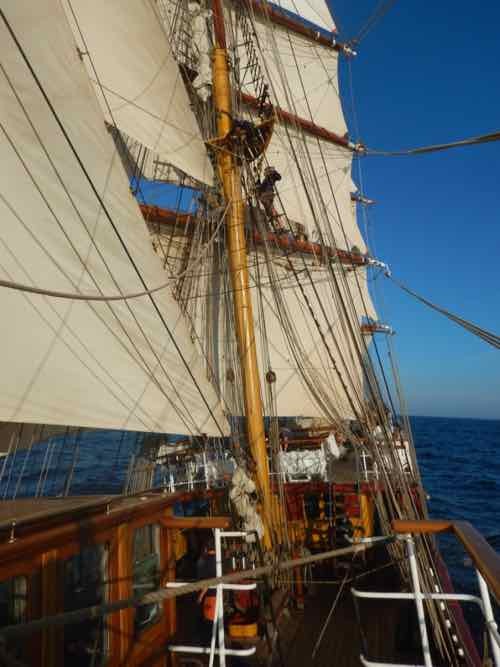 Monday afternoon 15:45 we departed Lunenburg, after a maintenance period
of almost two weeks in the friendly town where we experienced great
hospitality from a lot of people. Many came to wave Europa goodbye and
after a long blast of the famous horn we were off. Sails were up within
20 minutes, the engines could be switched off and we were underway under
sail.
The first encounter with the Atlantic ocean was a sunny but choppy one.
Strong winds during the night and morning before departure caused a
short steep swell close to land which made several people feel sick.
This didn’t stop them from setting more sails though.
Now, a day later, life on board settled a bit already, the waves calmed
down and all got used to the motion of the sea. Everybody shows up for
the meals, watches are complete and the first lectures on sailing are
given. We made 36 hours of good progress under sail until halfway this
night.  The wind decreased and backed from South-south west to the
South-south east. We took away most of the sails and are on engine now.
The beautiful full moon we enjoyed during the night has set and the sun
just rose above the horizon. The water temperature got above the 20
degrees Celsius. This means we left the last bit of cold Labrador
current and hit the Golfstream.  We’re now definitely on our way to the
warmer South.