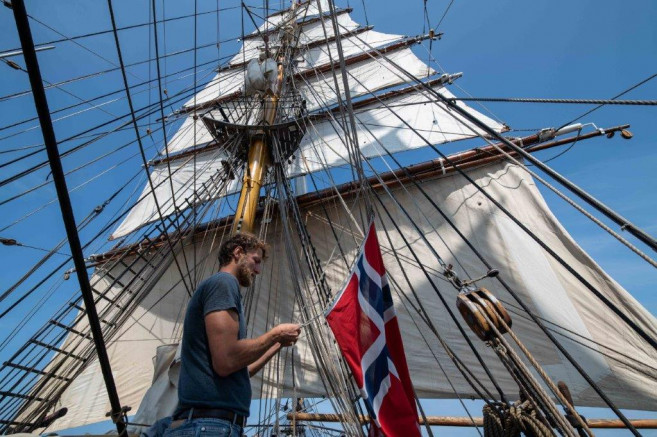 The new day welcomed us with the firsts sights of the Norwegian lands, while the Europa sails under following light winds, with her braces square, all squares sails set and the staysails hauled down.

Under these conditions she approaches the fjords where she plans to spend the night. By lunchtime the winds already brought us to the entrance of Kvitoya fjord, mouth of the extensive fjord system where Stavanger town is located, our destination for the day.

Sailing by, she leaves abreast the renown Kvitoya lighthouse, which shines its light from atop the 27m high tower, built over the white rocks that characterises the area.

It was time for changing the course further to starboard and get into the fjord. With both permanent watches on deck, plus many of the voyage crew, sailhandling started.

Brace sharp to Starboard tack!, gybe!, brace sharper!, pull on that sheet!, ease more those buntlines!, pull on the tack! … were some of the commands amongst the many given by the Captain, from the Poopdeck having a good overview of the situation, squeezing the last bit of good sailing along Byfjord, before arriving to town.

Not far from reaching harbour, the dark clouds hoovering over the fjord decided to give a bit of excitement, sending us their present in the form of a sudden shower with stronger shifting winds. Time for a bit of a rush to take down sails, of which we carried almost full rig but the Skysails.

Many were lending a hand on deck for the manoeuvre; suddenly and under the rain, many ropes were to be pulled. Some crew sprang aloft to furl the highest sails, while the rest of the canvas was being clewed up and the downhauls were pulled. This weather change didn’t last long, just enough for getting all soaking wet and thrilled about the exiting sailhandling. By then, the old town of Stavanger was already just ahead, and soon enough we did our mooring lines at the harbour of this picturesque town. Stavanger is one of the oldest towns in Norway, that gradually gain importance in the region since it was founded all the way back in the 8th or 9th century. Its relevance diminished after a big fire destroyed an important portion of the city in 1684, but since the beginning of the 19th century its commercial prosperity has grown steadily together with a population increase, to became nowadays the fourth largest town in the country. Home for an important shipping business together with industry, and becoming a growing touristic destination, it is also a significant base now for fisheries too, canning and oil exploitation.

With the night to visit the town, some enjoyed a walk around. Others preferred to have a quiet night off watch and leave the exploration of the city for the morning. Europa will continue her way tomorrow afternoon.