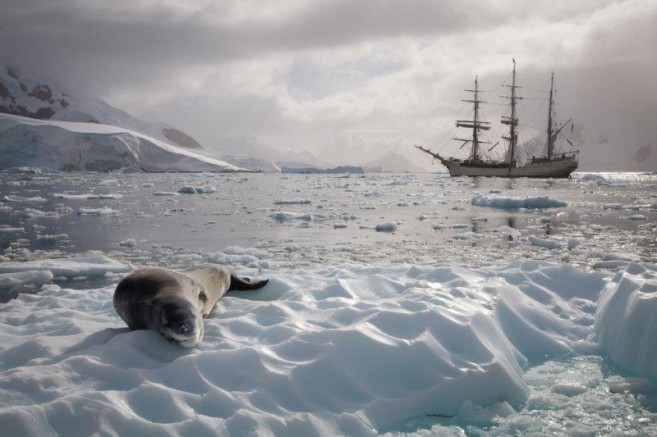 Anchored at 64 degrees (and change) South, it never gets quite dark at midnight. The simmering sea in the bay, the sedimentary rock on land both near and far, and the sea ice all between are monotone black, grey, and white, penetrated by smoky fog. The only color off the deck, the occasional blue of the drifting glacial ice and the odd orange ice tip scraped along from the hull. The only sound, the cracking of distant glaciers and the lapping of sea water on the skirts of those drifting nearby.

Henry, a dog owner from the States, has seen enough Weddell seals at this point and is happy to be pacing about the mizzen in pajamas during a dangerous anchor watch. At 3 o'clock (starboard!), a cracking iceberg calves loudly into the sea, and three squeaking Gentoos, rudely interrupted from important penguin work, surface and purpoise off and out of sight. A thin layer of fresh snow covers the wooden poop deck rails, just bare from a balmy Austral Summer day.

At 9 o'clock (port!) from the poop deck, a low-lying, tentacled iceberg the size of a Toyota Prius is sliding its way towards the back of the hull. Gijs and I are hunched over the rail, eyes fixed three meters below us as its foot slips out of view of the hull, followed by its top, and then (and then!), a mild echoing thud of ice against steel.

Ten minutes later, our anchor watch shift is over, and Mike and Wayne are taking in the scene, the snow picking up and the ice hemming in. The Prius' new momentum carries it into collision with another floater, settling within jumping distance from the lower sloop deck.

"Ok, guys, we are on iceberg watch tonight. If any of the icebergs come much faster at the ship, let us know. If that iceberg aft comes much closer to the height of the dolphinstriker or near the propellers, let me know. If that rock comes any closer to the ship," gesturing from the wheelhouse at the small mountain ahead of us, "wake up Klaas."

The scent of fresh baked bread (best eaten vigilantly in cold weather) from the galley's exhaust pipe wafts by.