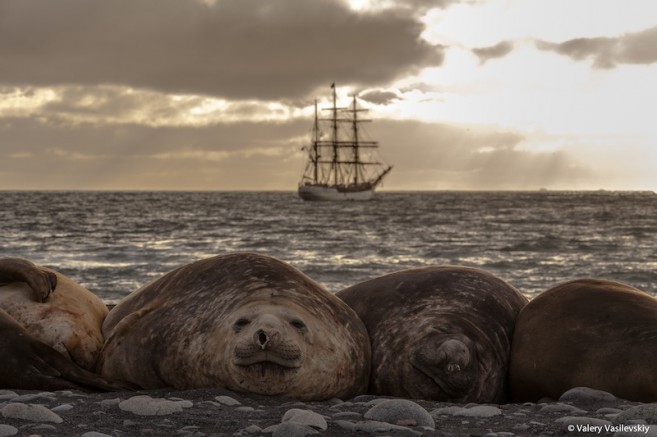 We discovered Europa, elegant as always, at the dock in Montevideo
imprisoned behind a fortress of containers and dwarfed by a huge
container vessel further along the quay. In a clear sky a huge moon
looked down upon the boat and its excited new crew. We left the
following morning past a sprawling collection of old rusting fishing
boats slowly sinking into the estuary of the River Plate. Looking back,
the outline of Montevideo gently receded into the horizon. This, for
almost two weeks, would then be devoid of any further interference by
land or ship. A storm that night while on the shallow waters of the
estuary was an early indication that all was not going to be plain
sailing, walking and lying with the ship healed over were techniques to
be learnt.

As we journey South, around the boat albatross glide effortlessly, giant
petrels perhaps less so and prion demonstrate amazing aerobatic skills.
Dolphins occasionally swim with us, at night accompanied by the glow of
phosphorescence. Whale sightings are made. We reach through the
Antarctic convergence.
As we approach South Georgia at last we see our first iceberg, massive
and threatening - we pass it separated by a healthy distance. In the
water now fur seals and penguins can be seen.
And the voyage crew on board have settled. Each watch seems to have
its own personality and method of organization. There is lively
conversation in the deckhouse, and support for those suffering from the
constant motion of the ship. The enthusiasm of the crew is exceptional
and infectious, their ability to climb the rigging in all seas and
prepare delicious food in a kitchen pitched at an acute angle,
extraordinary.

Suddenly at two o’clock on Sunday 27th November land is sighted, South
Georgia at last. It looks quite as grim and threatening as Captain Cook
would have us believe. Huge snow and ice covered rock faces soaring into
the sky, dramatic cloudscapes relieved by the occasional shaft of
sunlight.The next five days are filled with experiences none of us will
forget. The fun of wet landings made on shore, expertly managed by the
crew, the wildlife and hikes in such austere surroundings. The weather
is kind to us here.

Now it is onwards south and hopefully a bit east - Not in a straight
line but that is sailing; at first we were on course for the South
Sandwich Islands. We have passed a band of huge icebergs stranded in
shallower waters with smaller growlers in the water. It is colder on
deck, a taste of more ice to come.

We reach the South Orkney Islands, great dark snow topped cliffs and
glaciers falling into the sea. In many bays an iceberg is trapped. Very
inhospitable. A bouncy ride to Signy Island Base is initially obscured
by heavy snow. Good to be on land again and a great welcome from the
base staff waiting on the jetty (currently 5 in all). A brief time to
find space and soak in the atmosphere of this remote, harsh place.

Now we are on course for Elephant Island, possibly a landing. Yesterday
the crew skillfully navigated Europa under sail through a sea covered in
ice of myriad shapes, the quest to find animal shapes running riot
amongst the voyage crew. An amazing journey continues.

Fabulous entry in the log, keep them coming. Hello to Emma 'bear' in the kitchen. Looking forward to seeing you soon.

Hi, the logbook sounds really fascinating. I hope you're all fine and enjoy your sailing adventure. The description of the nature is intriguing. Send my love to Brigitte. Take care, Berit