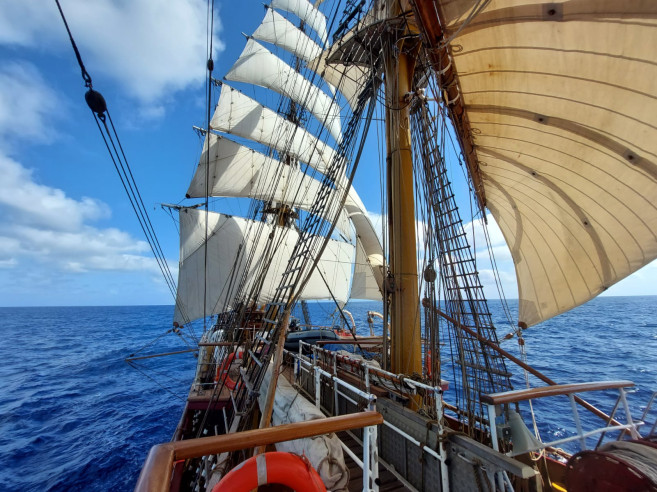 The promise of Europa

No person is an island on itself. The Europa might be. She makes her own water, generates energy in her bubbling belly and propels herself forward without wind. But that will not happen without the guidance of soft human hands. Her masts are climbed, her hinges are greased and her course is adjusted. All this is done with just one motto. Listen to the ship.

Listen to Europa, that would mean loosely translated. Europa. The woman, the myth, the goddess. The daughter of King Agenor who once played carefree on the beach with friends. Suddenly a white bull appeared, with a fur so dazzling that all the girls wanted to stroke it. Europa was suspicious at first, but eventually the curiosity of the young girl took over and she, too, became captivated by the alien animal. She saw herself in the big black eyes, and there she saw a woman for the first time. When she felt the horns, the animal threw his head in its neck and she landed on its broad back, legs wide. Hundreds of muscles started moving like a work of radars.

The bull walked away from the girls, hobbling at a trot to the end of the beach and galloping across the wine-colored waters of the Mediterranean. When land finally came in sight, Europa realized that she had left her old life behind for good. The white beach of Crete came into view, the bull dropped to the sand and soon the figure disappeared. In its place stood the supreme god, Zeus, who never could resist the beauty of a young woman. She let him seduce her and bore him three children: Minos, Rhadamanthys and Sarpedon. So she founded there, at the navel of the world, a continent that had no equal.

Middle Eastern knowledge and the writings of alchemists were collected in its libraries. Artists flocked there to see the light shining on its waters. Philosophers and poets were given free rein and King Solomo planted the first seeds of democracy. She attracted people from far and wide. She opened her borders, went in search of new worlds and enticed its inhabitants with promises of wealth and beauty. All its subjects could move and trade freely. So they got stronger and stronger. But when they reached puberty, they decided to rebel against their Mother's ideals. Those who got rich from the open borders now wanted to close them. That revolt was disastrous for her. Now Europa is an old, gray lady, looking down from her attic in Brussels. She sees diplomats and politicians walking through her long corridors, splitting high conference rooms in half because division creates easier targets than solidarity. Her children need a struggle, she made peace with that a long time ago. She sees brothers and sisters from her birth ground drowning in the waters over which she was carried on the back of Zeus, and curses him for the sweet lies he whispered in her ear. She is looking at the course of her life. The pride with which she once opened her arms to art and culture from all over the world, she now sees as the stupid naivety of a young girl.

But the myth of what Europa once was shows on the bow of this ship. The beautiful, young Europa, with the luxuriant hair and the full breasts. With big dreams that only a young girl can cherish. She leads the ship to new worlds, pulling it forward when wind and water fail. Here on board it is still believed that Europa knows the way. That blind faith does not arise from the naivety that the old Europa blames its younger self. But from something that her descendants in black suits do not know. The crew of the Europa looks ahead, sets course for new waters, without forgetting to look over their shoulder every now and then. A NATO fleet passes by. The fleet catches up with her, it doesn't bother her. Who goes faster is not always faster, the crew knows without having to say it. Dolphins jump ahead. Far away in Brussels, her grandchildren and great-grandchildren walk incessantly through revolving doors, drizzle glistening on their black suits. They work and go home alone, where Hello Fresh's dinner is on the doorstep and a screen paralyzes the brain. Europe sighs. Her bow creaks. Like one organism with dozens of tentacles, the crew hoists the sails for winds to come. There is no doubt that those winds will blow in her back.

Thank you for this valuable perspective and Beautiful writing .