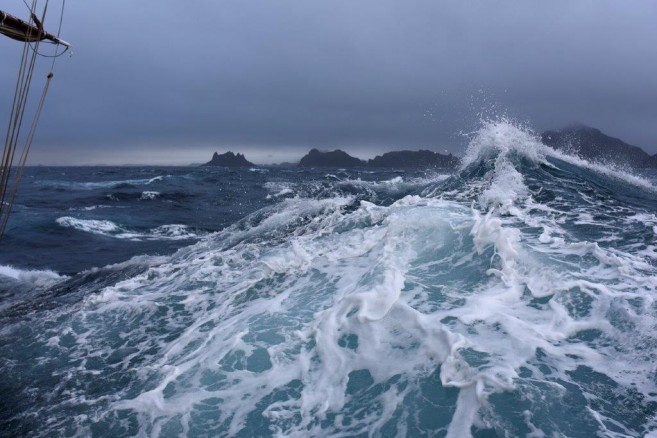 Just after 19:00 both engines are started– a sound we haven´t heard for quite a while. The engines have not been on since the Beagle channel. During the past few watches Janke has been studying the weather, charts, past tracks, expected swell and her experience. She has decided that we will enter the South Shetlands through Mc Farlane strait, between Livingston Island and Greenwich Island. She knows it can be quite wild here, but this evening, she says – it is possible.

Our entrance is more then spectacular. (And indeed quite choppy.) Before we enter we take all square sails away. We have the current against us, there is a big swell, waves breaking foaming white next to the ship. After 3 days off being steered by the voyage crew, Europa's helm is now taken over by first mate Finn. He steers us through the crashing waves, past Pyramid Rock, through the narrow part of the passage, into much calmer waters. Many of us are out on deck – holding on to the ship throughout the rough part, and after, staying out on deck far into the evening. Enjoying the sight of land. We all knew we were going to Antarctica, we all knew there would be land. Still, the sight of it comes as a surprise, almost unreal.

Great description! Wonderful to read, please continue to write, Thanks!