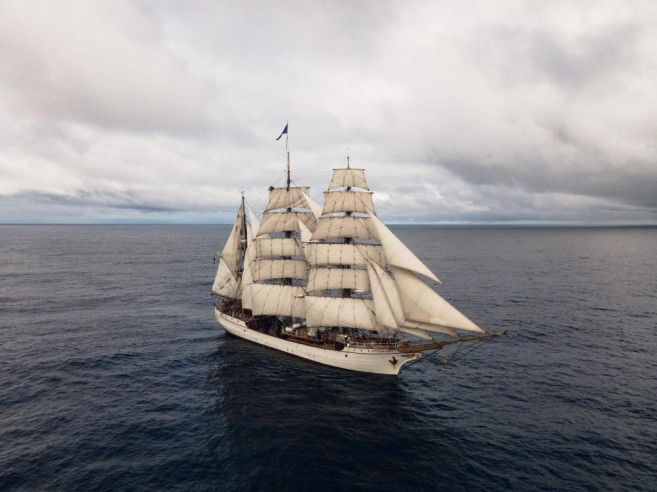 The winds have been so strong since we embarked from Horta that I was beginning to think that I would never have the chance to see Europa from the skies. I woke up this morning after a few games of late night poker with the Voyage Crew to a cold grey sky and eerily calm sea. The wind was low enough that I thought flying could be a possibility and I apprehensively retrieved my drone from my cabin. I returned from below deck to the helm where my cabin mate Richard, and HiddeBol stood watch.

The permanent crew were working on hoisting the main skysail yard after taking it down for repairs but as I waited, the wind started to increase once again. I used my short opportunity and launched the Bird from my hand nearby the helm. The dark and cloudy weather created an eerie background while the Europa Cast its mysterious shadow onto the ripples and waves of the north-eastern Atlantic.

I took my time watching the ship from above and began the journey back to the deck. The rise and fall of the ship over the waves made it increasingly difficult to catch the bird. Richard took the helm when Hidde Bol offered to catch it so I quickly moved out of the way. In a battle between the wind and the speed of our sailing ship.