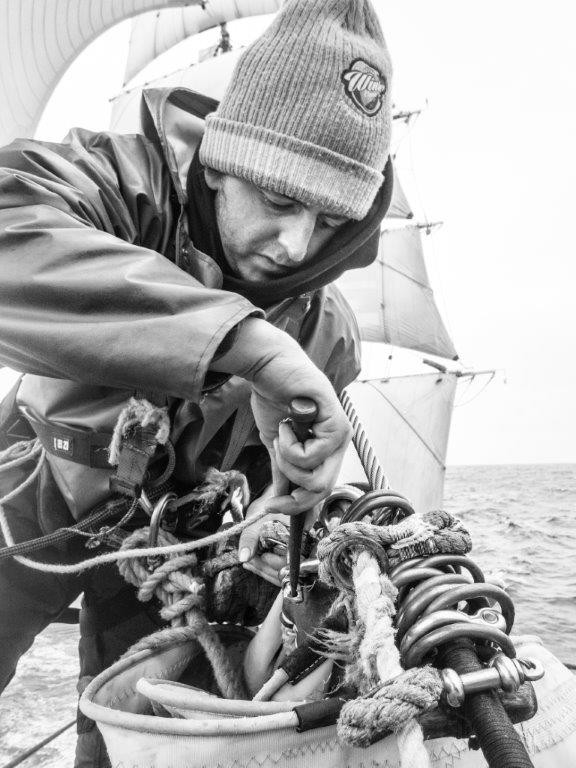 Just at midnight, with the beginning of the new day, the stormy winds and wild seas seem to start abating. After waiting a while to confirm it, Captain calls us to start setting more sails. We endure last day strong gusts, squalls and high swells with little canvas, now is time to start setting more sail trying to keep our speed over 7kn. Still heavily rolling and with the wind fluctuating between 20 to 28kn from the SW, the crew climbs aloft to unfurl Top Gallants, Fore Course and Mizzen Top Mast Staysail, under the light of the full moon now visible in the clear skies that start to show up between the clouds.

Eventhough the seas seemed to slightly ease, often water still runs over the Main deck, washing up all of us pulling ropes to clue down and hoist the sails. Despite the uncomfortable ride of the last day, now on lessening seas and winds, Europa keep going at a good speed between 7 to 8kn.

Along the night the sea conditions keep improving. From dawn and over the early morning we start setting all our canvas on Beam-reach with a steady fair W-ly of 15 to 20kn. Swell had eased considerably and for today we could enjoy another great sailing journey, but now on less rolling seas. It seems that leaving the latitudes of the 50’s, we are welcomed with fair conditions by the Roaring 40’s.

Squally as they can be, those middle latitudes use to have more steady Westerlies than the Low Pressure and instability corridor located southwards. As we experienced, over the ocean the Depressions tend to be at their most intense when their centres of low pressure lie between 50 and 70 º S. Anticyclones instead tend to travel somewhat at lower and higher latitudes.

Under this more benign situation, crew spent the day on some maintenance and re-rigging the sails on the Bow-sprit. Expecting a gradual improvement on the weather from now on, bigger Jibs are set to get more pulling power at the front of the ship.

Like this, the larger sail until now rigged on the Outer Jib Stay is passed a Stay backwards to be used as an Inner Jib. On the now free Outer Jib Stay a bigger sail is rigged, known by all crew on board with fondness with the nickname “BMF”… The Flying Jib is pulled out its resting place on the Forepeak and during the next days will be ready to fly on our outmost Stay on the bow.

All those sail changes just started the day that we leave behind the Polar waters and enter the Temperate area. Late last night the surface water temperature experienced a sudden rise, up to the 7ºC registered this morning, but by the afternoon this temperature had increased an additional 2ºC. Work on deck also start feeling slightly warmer. Still wearing foul weather gear, sure we start needing less layers underneath. Looking backwards we have been sailing on Antarctic waters so far for almost 30 days, now it is time for waving farewell to the Southern Ocean and start experiencing milder temperatures. Although entering the South Atlantic for us it may mean a weather and wind improvement, oceanographically the middle latitudes are biologically less significant than the highly productive waters surrounding Antarctica. South of the Convergence, rich deep waters ascend creating an important input of nutrients to surface, that are the base for supporting large amount of biodiversity. On the middle latitudes where we will find ourselves from now on, the warmer surface water carries significant lower levels of nutrients. In some areas, like around Tristan da Cunha and other remote oceanic islands, those are brought upwards from the depths of the ocean when the deep currents find an obstacle on their flow and are pushed upwards following the rise of the sea bottom, thus allowing the existence of truly oasis of large quantities of oceanic life.

Sailing along those waters we keep all the canvas set during the morning, reaching speeds over 7.5kn on a good 40 to 35º course towards Tristan da Cunha. Like this, from noon to noon we have covered a distance of 182nm, giving an average of 7.6kn. Since our departure from South Georgia we have left at our backs 505nm. And already just under 1000nm left to sail to our next stopover.

It was just in the afternoon that the wind increased a bit, and with it the heeling of the ship to Starboardside. Higher Staysails and Gaff Top Sail are furled, and the new big Outer Jib just finished to be ready, not to be set until later at night.