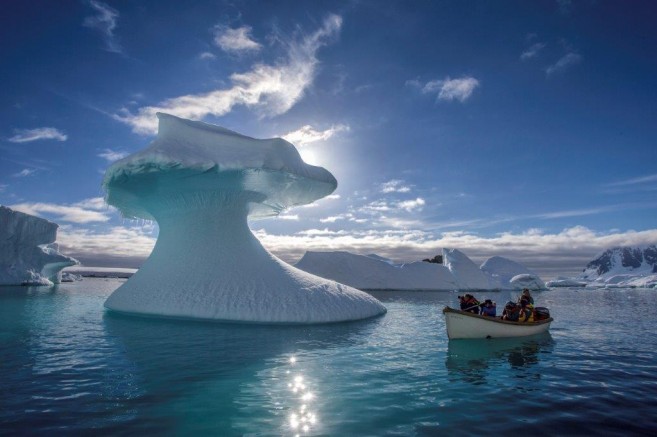 Yesterday’s excitement of traversing the Lemaire Channel and the visit to the Ukrainian Station of Vernadsky, ended up with an enjoyable night at anchor. As hours passed by, the clear skies became overcast again, and we woke up as the anchor was heaved under dull weather. Under snowy conditions soon we reach Berthelot Islands, where we plan to spend the morning ashore. This small archipelago consists of two main islands and a few rocks and islets. It was first roughly charted during Charcot's first expedition (1903-1905) and was named Berthelot after Marcelin Pierre-Eugène Berthelot (1827-1907), a prominent French chemist and politician. Charcot produced a more accurate map of the islands on his second expedition (1908-1910).
Steep in appearance and holding large moss beds, the only accessible islet for landing is the smallest of the archipelago, but it holds a large group of nesting Adélie penguins, which we have not yet seen during our trip.

The hazardous navigation amongst icebergs and the low visibility made for quite a difficult approach to Berthelot, and with the ship dealing with shallow waters and icy conditions, zodiacs are dropped and shuttles to the rocky shores start. Right next to our landing site we already see the first group of Adélie penguins. At this time of the year mostly is just the almost fledged chicks that are around, forming crèches seeking for protection against Skua’s and other predators, while they wait for their parents to come back from the sea to feed them. After spending some time in the areas around the coast, many of us take a bit longer hike to the island top, over snowfields and rocks. There, lichens and mosses thrive and care must be taken not to step on them. Preferably the little hike takes
place over the red and green colored snow, loaded with colonies of the microscopical snow-algae. Up on the top of the rounded island, a fantastic panorama reveals to us.
Huge icebergs surround us and at the background the high Antarctic Peninsula mountains start to show their splendor between the slowly disappearing clouds.

Difficult as it was to keep the Europa safely at the northern side of the island, the captain decides to look for a better spot on its southern shores. There they sit until zodiacs are sent to pick us up.
Berthelot turned to be a great spot to spend a relaxed couple of hours, encroached into the magnificent surroundings of Collins Bay, a place of great beauty, still outside the main tourist areas in this part of the Antarctic Peninsula. Actually we spend the rest of the day in the large Collins Bay, limited at its Northern side by Deliverance Point, the conspicuous cliffs of Cape Perez in the South and the gigantic Trooz Glacier at its head. Cruising along its glacier front we have lunch admiring its ice cliffs, which are measured by sextant and radar to be about 80m high, extending over a length of 1.5nm and climbing up the mountains for over 15nm. By the time almost all of us are running around on deck with a coffee on our hands, one of the large icebergs close to our drifting position, calves and turns over, offering an unforgettable spectacle. Shortly afterwards Europa is repositioned a bit southwards, closer to a smaller uncharted glacier tongue, between Trooz and Lind glaciers. Here our
guides discover from deck a wonderful spot to zodiac cruise. Brash ice, bergy bits and icebergs of any shape and shades of blue, festoon the whole area, surrounded by a few huge tabular icebergs and further away behind the ice chaos, large glacier fronts frame the scene. Swell under the floating ice makes the whole landscape a dynamic experience.

Plentiful Crabeater seals snooze on the ice floes, allowing us to close approach without disturbing them. As the cruises take place, the weather keeps clearing up, until it leaves us with a sunny afternoon. Funny enough, we started the afternoon activity under the clouds just to finish it with blue skies, becoming overcast again later on. Due to the non-favorable winds forecasted for tomorrow, Europa will spend the evening and part of the night steaming her way north through the Lemaire Channel. With the N-ly wind starting later on, looks like tomorrow could be our Antarctic sailing day. If all goes well, plans are to sail the Lemaire Channel Southbound again, and if conditions allow, take some shots of the sailing from a zodiac.

All in all a great day full of truly Antarctic experiences, spent amongst Adélie penguins and icebergs on the southernmost area reached on our trip.

Thanks for a wonderful description from your fantastic trip. This gives us possibility to follow our daughter Gunilla when she is so far from us. Proud parents in Falun Sweden.